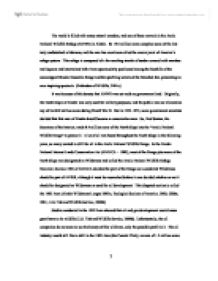 The world is filled with many natural wonders, and one of these marvels is the Arctic National Wildlife Refuge (ANWR) in Alaska.

The world is filled with many natural wonders, and one of these marvels is the Arctic National Wildlife Refuge (ANWR) in Alaska. Its 19.6 million acres comprise some of the last truly undisturbed wilderness, and the area has even been called the crown jewel of America's refuge system. This refuge is composed of a far-reaching stretch of tundra covered with marshes and lagoons and intertwined with rivers spectacularly positioned among the foothills of the snowcapped Brooks Mountain Range and the sparkling waters of the Beaufort Sea, presenting an awe-inspiring spectacle (Defenders of Wildlife, 2001a). It was because of this beauty that ANWR was set-aside as government land. Originally, the North Slope of Alaska was only used for military purposes, and the public was not allowed on any of its 48.8 million acres during World War II. But in 1952-1953, some government scientists decided that this area of Alaska should become a conservation area. So, Fred Seaton, the Secretary of the Interior, made 8.9 million acres of the North Slope into the "Arctic National Wildlife Range" to protect it. A lot of oil was found throughout the North Slope in the following years, so many wanted to drill for oil in the Arctic National Wildlife Range. ...read more.

Drilling would cause great harm to the animals that rely on the Coastal Plain of ANWR. Additionally, the 135 species of birds that nest and feed in the 1002 Area would be affected. Many of the birds would lose critical habitat, causing population declines for already small populations. Also, the oil fields would attract predators, further lowering their numbers (Audubon, 2002). Other studies around the other Alaskan oil fields have shown tundra swans to nest over 650 feet from the roads (Gibbs, 2001). Many of the other migratory birds are also sensitive to disturbances, and oil production in ANWR would interrupt migration patterns that have been occurring for many years (Alaska Wilderness League 2003b). The migratory species would carry the effects with them throughout the world (UNEP, 2001). Caribou are also sensitive to disturbances. Caribou with young stay at least 2.5 miles away from roads (Gibbs, 2001). So, the caribou would be pushed into the foothills of the Brooks Range, an area with more predators (Ecological Society of America, 2002). A computer model estimated that calf survival would be reduced about 14 percent by oil production in ANWR (Gibbs, 2001). And, the U.S. ...read more.

The Department of the Interior has estimated that "there is only a one-in-five chance of finding any economically recoverable oil in the refuge" (Roth, 1995). It is not worth ruining a pristine wilderness supporting many animals for very little oil that may not even be "economically recoverable." Not only is there little oil under the Coastal Plain, it is also found in only small accumulations rather than one large oil field (like Prudhoe Bay). So, there would have to be more development areas, increasing the effect on the wildlife and environment (Ecological Society of America, 2002). Overall, the drilling would cause a lot of damage. A pristine wilderness would be turned into a noisy, polluted, developed area. Millions of species of animals would be harmed. They would no longer be able to use the Coastal Plain to feed, mate, nest, and hunt. They would be forced onto marginal lands, and their numbers would be negatively affected (Alaska Wilderness League 2003b; Gibbs, 2001; U.S. Fish and Wildlife Service, 2000b). And, the drilling could cause many environmental problems, including global warming, smog, and acid rain (Indigenous Environmental Network, 2001). Plus, the drilling would not even solve the energy problems in the U.S. So, drilling in ANWR should be prevented! 2 ...read more.