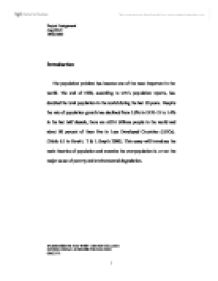 Introduction The population problem has become one of the most important in the world. The end of 1998, according to UN's population reports, has doubled the total population in the world during the last 50 years. Despite the rate of population growth has declined from 2.0% in 1970-75 to 1.4% in the last half decade, there are still 6 billions people in the world and about 80 percent of them live in Less Developed Countries (LDCs). (Table 6.1 in Hewitt. T & I. Smyth 2000). This essay will introduce the main theories of population and examine the overpopulation is or not the major cause of poverty and environmental degradation. Theories of population Thomas Malthus published his famous essay: the principle of population and food production in 1798. In that essay, he illustrated the relationship between population increases and subsistence food supply. The main idea of that theory is that the food supply can only increase arithmetically because of limited land availability and limited technologies, but population increase geometrically. If population increases outstrips food increases, it would cause poverty, environmental degradation and even wars. Therefore, we must control population increases in some ways. He also states that if the average food supply falls below the subsistence level of consumption per people. It may cause starve and famine. The increase of morality that called a 'positive check' reduces the population. The 'preventive checks' includes birth rate control, delayed marriage and abstaining from marriage altogether to reduce population growth (Crook. N 1997). People argued the weakness of the ideas strongly after Malthus' ideas had been published. Godwin believes that rapid improvement of technologies can provide enough food production to feed high increasing population. Alternatively, Marx (1887 in Crook. N 1997) argues that the key factor of population problem is unequal distribution of land and food production. Into 20th centuries, some people based on Malthus' original views and developed a sort of new views, which call Neo (new) ...read more.

At same time, they may want to get more profits through selling woods in the market, which is much more profitable than selling food products. The large international commercial organizations damage environment far more than the individual people. The only objective for them is the significant profits. Thus, they do not care about the environmental deterioration very much. In addition, they usually do not directly suffer from the feedback of environmental degradation that they caused. If fertilizer finds its way into river, the people who live in the downstream may suffer from it most. If the trees are cut down too quickly, there may be serious climate change (Crook. N 1997). It is not clear that population growth is the main cause of environmental degradation. In many of African countries, especially Sub-Saharan countries, there is not much population than other countries but they suffer from serious environmental problem, particularly droughts. In the United States population growth is only 1 percent every year in US, while the pollution grows at 9 percent annually (Simon. J 1977). The example notes that the economic growth has much more influence on environmental pollution than population growth. Summary To sum up: According to Simon's (1977) conclusions, in a short term population growth has some negative influence on development in LDCs, particularly in decreasing the GNP/GDI pre capita annually. However, in a long run population growth will increase the amount of workforces and give more positive effects upon economic growth in LDCs, especially in agriculture as well as in public infrastructures. The main population problem is the distribution of food production and population density. Furthermore, Crook (1997) concludes that people will eventually manage environment by rapid development of economy and technologies. Therefore, population growth is not the major cause of poverty and environmental degradation, but they are interactive In theory above conclusions are true. However, in practice we should be in a subject position to analyze the individual problem. A country's value, culture and beliefs are very fundamental things for people to make different decisions (Simon. J 1977). ...read more.