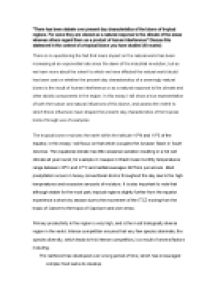 &quot;There has been debate over present day characteristics of the biome of tropical regions. For some they are viewed as a natural response to the climate of the areas whereas others regard them as a product of human interference&quot; Discuss this statement in t

ï»¿"There has been debate over present day characteristics of the biome of tropical regions. For some they are viewed as a natural response to the climate of the areas whereas others regard them as a product of human interference" Discuss this statement in the context of a tropical biome you have studied (40 marks) There is no questioning the fact that mans impact on the natural world has been increasing at an exponential rate since the dawn of the industrial revolution; but as we learn more about the extent to which we have effected the natural world doubt has been cast on whether the present day characteristics of a seemingly natural biome is the result of human interference or as a natural response to the climate and other abiotic components in the region. In this essay I will show a true representation of both the human and natural influences of this biome, and assess the extent to which these influences have shaped the present day characteristics of the tropical biome through use of examples. The tropical biome encircles the earth within the latitude 10°N and 10°S of the equator, in this essay I will focus on that which occupies the Amazon Basin in South America. ...read more.

These distinct variations in characteristics due to geographical location and abiotic factors are evidence that the current state of the rainforest is a result of natural responses to the climate of the areas. Due to its equatorial location, the Amazon receives high levels of sunlight throughout the year, resulting in high levels of photosynthesis and lots of biomass; together with the warm, wet climate creates an environment that encourages growth. This results in intense competition for sunlight, which has lead to the development of a vertically stratified forest, just another example of how characteristics of the biome are a result of natural processes. It is also important to note that individual plant species characteristics are the result of adaptations to environmental factors such as: Leaves in the canopy are large in order to maximize photosynthesis as light levels are lower whereas emergent trees have smaller leaves to minimize the water loss through transpiration. Leaves in the understorey have extended apical ends or ?drip tips? in order to reduce water build up on the leaf which hinders transpiration. This is especially important in the understorey layer as lack of wind and high humidity reduces transpiration rates. ...read more.

burning of cheap fossil fuels such as coal, CO2 levels rise effecting the growth of plants, the increasing temperatures caused by the release of greenhouse gasses also decrease the efficiency of photosynthesis as enzymes vital to the process become denatured, hindering the efficiency of the process, causing the CO2 levels to rise further. The increasing temperatures also upset the balance of the water cycle in the rainforest, resulting in a net water loss in the biome, an impact who?s consequences are not been fully understood yet. This essay intended to assess the extent to which these influences have shaped the present day characteristics of the tropical biome, using the Amazon as an example. From discussion and assessment of the features it has become evident that the present day characteristics of the biome are a result of a natural response to the climate, this is shown through the variations in biodiversity depending on the region and their varying climate. Although mans impact is not to be forgotten about, its effect is minimal when compared to natural effects at present. Although as mans influence grows so to will the impact, and the full consequences of the rising CO2 levels and global temperatures are still not fully understood. ...read more.