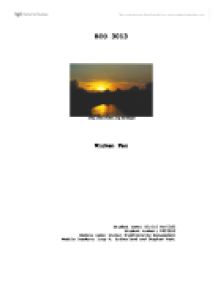 This essay concentrates on current and future management of Wicken Fen in terms of its role as a repository of biodiversity, a location for research, and a recreation and education resource (http://www.wicken.org.uk/).

BIO 3013 http://www.wicken.org.uk/images Wicken Fen Student name: Eirini Pavlidi Student number: 2433553 Module name: Global Biodiversity Management Module Leaders: Lucy A. Sutherland and Stephen Kett Introduction Wicken Fen is a wetland nature reserve located close to Cambridgeshire in England. It is the oldest nature reserve in Britain and the first reserve obtained by the National Trust in 1899. The reserve contains farmland, fenland, reed beds and marsh. Wicken Fen is one of the four remaining wild fens in the Great Fen Basin area of East Anglia. Those 4 wild fens account for only 0.1% of the former fens, the majority of which have now been converted to cultivated land (http://www.wicken.org.uk/). Wicken Fen's surface is approximately two meters higher than the surrounding land. This is because although the majority of the soil in the area was drained, and ploughed, Wicken Fen was never drained, and therefore still stands at a higher level. It is due to this absence of draining that Wicken Fen attracts many species of plants and animals which had a much higher population in the past(Sedgwick, 2002). Wicken Fen's middle section is filled with wild habitats. The outer regions are covered with farmland, which is part of an ancient landscape characterised by great diversity. ...read more.

The volunteering activity shows how important Wicken Fen's role is perceived as, and at the same time promotes ecology interest and knowledge. (http://www.wicken.org.uk/) The core strategy is to increase the size of existing fields by confining carr. Cut material is then placed within the fringing carr and not into regions of land that are likely to be cleared in the future. A diversity of carr age structure is accomplished by letting some cleared regions regenerate while others are included into a cropping cycle. (http://www.wicken.org.uk/) By increasing the boundaries of the fen from Wicken, it could be possible to conserve many populations of fen fauna and flora over a broader region, thus limiting the risk of extinction of species and enabling easier migration between populations. Trees in Wicken Fen are a habitat for the insects and birds. National Trust's management of trees is to promote safety to them and to remove dead trees. Priority is given to the trees which are located in the boardwalk, Education area and nature trails (http://www.wicken.org.uk/). This may not be very beneficial as it may negatively affect certain species of insects that might be using dead trees as their habitat. ...read more.

Conclusion Wicken Fen is a natural wilderness. There is a major effort from the people involved to manage the Fen in a way that protects, maintains and develops the sensitive balance of species which has evolved over the years. The direction that management is presently heading towards is to re-establish the old operational practices that species have become dependent on. For example the Sedge plant, is harvested on a yearly basis and sold for thatching roofs. Ever since the first sedge was harvested back in the 15th century, it has been regularly cut. Therefore, a group of plants and animals have developed that are dependent on the regular clearance of the sedge in order to survive. Many plants and animals are dependent on such management to keep their habitats. The current state of Wicken Fen is the result of centuries of management by humans. Many of the systems now in place have not changed much since medieval times. Nearby areas however, have changed dramatically and it is very difficult to imagine how they all looked. Only very few places still exist where someone can experience this primitive landscape and Wicken Fen is one of these. Reference: 1) I. Sedgwick, (2002), Wicken Fen, The National Trust 2) http://www.wicken.org.uk/ 3) L.A. Sutherland and S. Kett, (2007), Global Biodiversity Management. BIO 3013. 4) http://www.wicken.org.uk/images ?? ?? ?? ?? 2 ...read more.