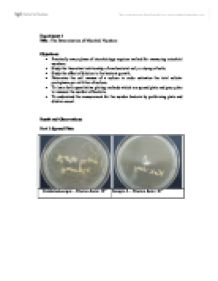 Title : The Determination of Microbial Numbers Objectives:Practically every phase of microbiology requires method for measuring microbial numbers. Study the theoretical relationship of one bacterial cell, or clump of cells.

This tube now contains 1 ml of the original sample diluted ten times: thus 1.0 ml of this dilution is equivalents to 0.1 ml of the original sample. Later on, mix thoroughly by shaking vigorously. Repeat the same procedure to obtain the other two dilution factor tube which is 10 and 10. After obtained it, remember to shake it vigorously to ensure all the bacteria have equally spread to all over the tube. Finally, transfer the dilution tube to the agar surface plate which is labeled accordingly and remember do the most important step to spread the sample on the plate. During this step, a sterile glass is required to use. In this technique, the glass spreader is sterilized by dipping it in alcohol, and the alcohol is burned off. Allow the spreader too cool. Lastly, spread the sample over the surface of the agar plate by revolving the plate on desk. The main reason to dipping it to alcohol is to wash the sterile glass spreader without any foreign microbial and burned off with the fire is to ensure all the microbial bacteria have killed. Well, spread all the agar plate surface of every dilution factor using the same technique and incubate the Petri plates at room temperature in an inverted position for 2 days. In the part II of the experiment, as usual, we do the step of label four 9.9 ml water blanks: 10-2, 10-4, 10-6 and 10-7. ...read more.

To more clearly state the results of a viable count, the date are often expressed as the number of colony forming unit (cfu) obtained rather than as the number of viable cells (since a colony-forming unit may contain one or more cells). Despite the difficulties associated with viable counting, the procedure gives the best information on the number of viable cells in a sample and so is widely used in many areas of microbiology. For example, in food, dairy, medical, and aquatic microbiology, viable counts are employed routinely. The method has the virtue of high sensitivity, as a sample containing only a single viable cell can in theory be counted. This feature allows for sensitive detection of microbial contamination of food products or other materials. Moreover, the use of selective culture media and growth conditions in viable counting procedures allows for the counting of only particular species in a mixed population of microorganisms present in the sample. Conclusion: * The number of colonies on plate A in part II is 40 and the calculation yields a concentration of 400 000 bacteria mL-1 of the original sample. * The plate count method is suitable to determine the number of microbial number but is not so accurate because we just assume the colonies as viable cells. * The plating count theory is assumed that each colony arises from one cell. * The viable count are counting the living cell and able to divide and form offspring. Reference: * http://www.textbookofbacteriology.net/growth.html * http://www2.hendrix.edu/biology/CellWeb/Techniques/microspread.html * http://www.biotopics.co.uk/microbes/tech3.html * http://biology.clc.uc.edu/fankhauser/Labs/Microbiology/Meat_Milk/Pour_Plate.htm * http://www.mansfield.ohio-state.edu/~sabedon/biol4038.htm * Biology of Microorganism, ELEVENTH Edition, Micheal T.Madigan, John M.Martinko, Prentice Hall, page144-146. ...read more.