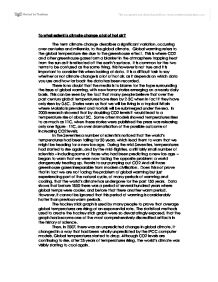 To ehat extent is climate change a lot of hot air?

To what extent is climate change a lot of hot air? The term climate change describes a significant variation, occurring over centuries and millennia, to the global climate. Global warming refers to the global temperature rise due to the greenhouse effect. This is where CO2 and other greenhouse gases form a blanket in the atmosphere trapping heat from the sun as it is reflected off the earth's surface. It is common for the two terms to be confused as the same thing, this however is not true and it is important to consider this when looking at data. It is a difficult task to say whether or not climate change is a lot of hot air, as it depends on which data you use and how far back the data has been recorded. There is no doubt that the media is to blame for the hype surrounding the issue of global warming, with new horror stories emerging on a nearly daily basis. This can be seen by the fact that many people believe that over the past century global temperatures have risen by 2-3C when in fact it they have only risen by 0.6C. Stories warn us that we will be living in a tropical Britain where Malaria is prevalent and Norfolk will be submerged under the sea. ...read more.

When climate change does become a problem in the future, if it ever becomes a problem, we will be left in an incomprehensible situation as no one will believe that what is happening is true until it's too late. The government is also to blame as the Environment Agency produced statistics that suggested temperature increases of 15C and sea level increase of 11m over the next 1000 years, scientists believe that this will not be the case. MP Peter Lilley drew attention to the fact that, outside the Palace of Westminster, snow was falling, the first October snow recorded in London for 74 years and said "Who says that God hasn't got a sense of humour?" is this not an altogether possible idea? The supposed peril of global warming - and the political response to it - has become one of the overwhelmingly urgent issues of our time. If we accept the theory that the planet faces a threat unprecedented in history, the implications are catastrophic. But equally mind-boggling are the implications of the price we are being asked to pay by our politicians to meet that threat. More than ever, it is a matter of the highest priority that we should know whether or not the assumptions on which the politicians base their proposals are founded on properly sound science. ...read more.

Now, however, I believe that all the concerns and media hype about climate change are unnecessary as there is strong evidence to disprove the phenomenon, and show that the Earth has experienced similar conditions before as part of a natural cycle. I think that climate change cannot be proved as a lot of hot air; the climate has constantly been changing no matter how far back in time you go, in terms of global warming, however, I strongly believe that it can be proved as a lot of hot air. How long will it be before sanity and sound science break in on what begins to look like one of the most bizarre collective delusions ever to grip the human race? It is alarming that we are still being told that temperatures are rising, and that the increase is due to human influence, yet in reality temperatures are falling. Do I think that we are contributing to greenhouse gases and climate change? Yes, but that contribution is so small that it is barely worth considering the "damage" it is supposed to have caused to the climate. However, I do still feel that it would not be a bad thing to control our use of fossil fuels and promote the use of infinite resources to preserve the planet for future generations. ...read more.