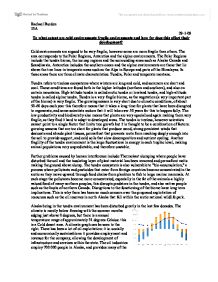 To what extent are cold environments fragile environments and how far does this affect their development? Cold environments are argued to be very fragile; however some are more fragile than others. The area corresponds to the Polar Regions, Antarctica and the alpine environments. The Polar Regions include the tundra biome, the ice cap regions and the surrounding areas such as Alaska Canada and Scandinavia. Antarctica includes the southern ocean and the alpine environments are those that lie above the tree lines in temperate areas such as the Alps in Europe and parts of the Himalayas. In these areas there are three climate characteristics: Tundra, Polar and temperate montane. Tundra refers to treeless ecosystems where winters are long and cold, and summers are short and cool. Those conditions are found both in the higher latitudes (northern and southern), and also on certain mountains. High-latitude tundra is called arctic tundra or lowland tundra, and high-altitude tundra is called alpine tundra. Tundra is a very fragile biome, as the vegetation (a very important part of the biome) is very fragile. The growing season is very short due to climatic conditions, of about 50-60 days each year this therefore means that it takes a long time for plants that have been disrupted to regenerate, and some scientists reckon that it will take over 50 years for this to happen fully. ...read more.

Animals avoid areas near infrastructure, and breeding success has greatly diminished in the past few years. The ecological impacts of the loss of habitats and redistribution of animals may lead to certain areas of the arctic being overgrazed and eroded. It has been shown that a new road can seriously affect wildlife up to 5km away, but the cumulative impacts on the system can be felt up to 20km away. Also many groups of indigenous people such as the Saami rely on hunting and herding of reindeer and caribou, and they have developed traditions and cultures around these animal. But with development in the area and disturbance of the animals, we are also affecting the indigenous people's lives and traditions, and they are an equal part of the fragile environment. The arctic council has been established in 1996 to help the fragile ecosystem. The council was formed to provide a high level forum for the arctic states to address environmental protection, sustainable economic development, sustainable activities, health, community development, tourism and transport and communications. Indigenous people were also ensured permanent participation. There have been 5 programmes set up to deal with environmental problems such as oil pollution the dumping of radioactive waste, contamination of the environment by heavy materials and arctic haze. ...read more.

Examples of greener ski resorts include the Aspen Ski company who source 5% of their energy from wind power, which is a large help to the environment in the area as emissions are being decreased. In conclusion, cold environment are all invariably fragile, as aspects such as vegetation, climate, animals and permafrost are interlinked and rely on each other to remain stable. Vegetation has been affected in every cold environment I have studied, and this is due to very short growing seasons and a low biodiversity making it harder for plants to repair in different ways as they are specialised. The climate is changing due to climate change, meaning the seasons are changing and permafrost, vegetation and people's activities have to change around this i.e. skiing. Animals are affected easily and are a fragile part of the cold environments, as any development will change their way and standard of life, and usually not for the best such as the penguin rookeries in the Antarctic. However it is not acceptable to say that cold environments are the only fragile environments, but we have to compare them to others, such as tropical rainforests or the temperate maritime climate. In comparison to these two, cold environments are fragile, as they have been untouched by modern development before, and since we have surged in quickly when we have found the space and resources valuable they have been hit hard. ?? ?? ?? ?? Rachael Burden 13A 29-1-09 ...read more.