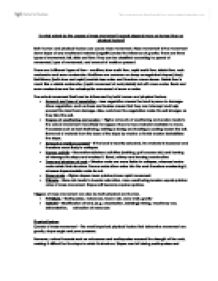 To what extent do the causes of mass movement hazards depend more on human than on physical factors?

To what extent do the causes of mass movement hazards depend more on human than on physical factors?

Both human and physical factors can cause mass movement. Mass movement is the movement down slope of any weathered material (regolith) under the influence of gravity. There are three types of movement; fall, slide and flow. They can be classified according to; speed of movement, type of movement, and amount of moisture present.

There are 6 different types of flow – mudflow, slow earth flow, rapid earth flow, debris flow, rock avalanche and snow avalanche. Mudflows are common on steep unvegetated slopes (clay). Earthflows, (both slow and rapid) contain less water and therefore move slower. Debris flow is much like a debris avalanche, (rapid movement of rock/debris) but with more water. Rock and snow avalanches are the catastrophic movement of snow or rocks.

The actual movement itself can be influenced by both human and physical factors;

Triggers of mass movement can also be both physical and human.

Causes of mass movement – The most important physical factors that determine movement are gravity, slope angle and pore pressure.

However, natural hazards such as volcanoes and earthquakes exceed the strength of the rock, making it difficult for the slope to retain its structure. Slopes can fail during earthquakes and cause major damage to structures and facilities as well as people. An example of this is the Huascaran Avalanche triggered by the Peru earthquake in 1970. An offshore earthquake in the Pacific Ocean (7.7 on the Richter scale) triggered rock and snow avalanches on Nevado Huascaran. The movement began as a rock fall, but soon transformed into a debris avalanche and then a debris flow, about 100 million cubic metres of material. The overall vertical drop was approximately 4000 metres and travelled 16km laterally. The debris buried the town of Yungay, killing 18,000 people.

Other physical factors, such as heavy rainfall, can also lead to slope instability and thus failure. If there is a prolonged period or heavy rainfall, the slope becomes heavily saturated. The water infiltrates and percolates into the slope, making it weaker.  Snow melt works in the same way.

Normal everyday processes such as gravity can also lead to slope failure. Gravity has two effects; it acts to move the material down slope (slide component) and it acts to stick the particle to the slope (stick component). The down slope movement is proportional to the weight of the particle and the slope angle.  Water lubricated particles, and, in some cases, fills the spaces between the particles. This forces them apart under pressure. Pore pressure will greatly increase the ability of the material to move. This factor is particularly important in movements of wet material on low angle slopes. 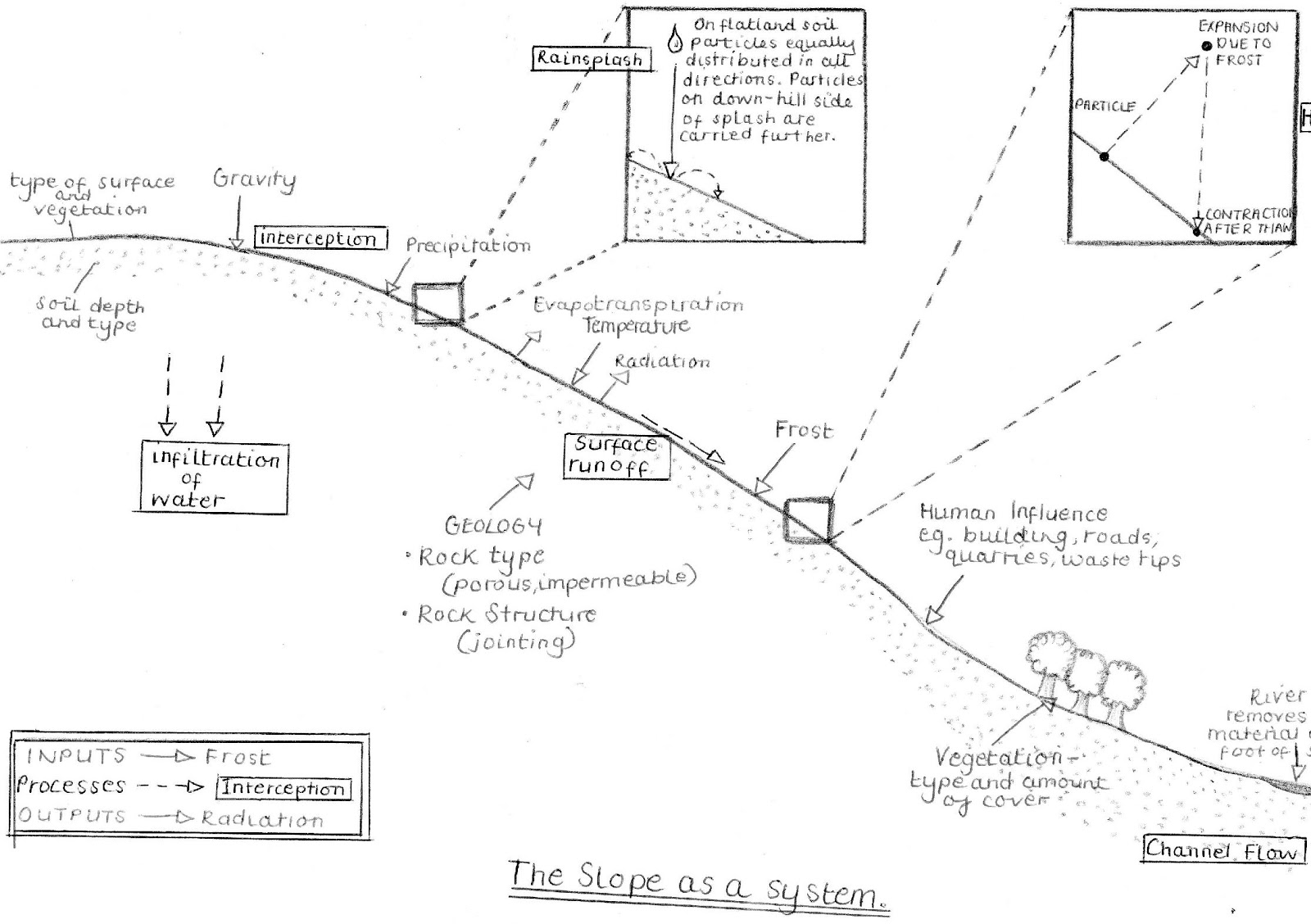 Other factors which affect the slope’s strength and stability are the inputs, outputs and processes which occur in a slope system. All these things have both positive and negative effects on the slope.

It appears that human factors are somewhat more damaging to slopes, but do not harm as quickly as physical factors. For example, on slopes where recreational activities occur, such as walking and climbing on mountains, damage the slope over a long period of time, and the damage gradually gets worse. Farming the land also damages the land and destabilises the slope as the ground is constantly being tampered with. Grazing also means the land is more prone to damage.

Other human influences such as urbanisation can completely destroy the slope’s structure. In LEDC cities such as Rio de Janeiro, Brazil, the city often has little room to accommodate the population. The city and its population begins to spread out, and the low income residents are forced to build on the only available land, usually on steep slopes.

Mining can also have a severe effect on the internal structure of the slope. Continuous mining can eventually destabilise the slope and force it to collapse. This is also similar when extracting resources.

Other human influences include; deforestation, which means there are no roots to bind the soil/earth together,

In some cases, human factors can actually re-stabilise a slope. For example, the replanting of trees, or afforestation, can stabilise the slope. The roots from the trees will bind the soil, making it harder to collapse.

Other ways in which human influences can help prevent slope failure are;

Efforts have also been made to prevent mass wasting by supporting the base of the slope to prevent it from failing. Wire boxes are often used for these purposes.

One of the worst disasters of the 20th Century occurred in the Piave valley in north east Italy, in 1963. A debris slide with a volume of 240 cubic metres fell into the reservoir behind the Vaiont Dam. The damn was completed in 1960 after 4 years work, during which time concern was expressed that debris slides were possible as the accumulating

water created instability in the adjacent bedrock. A slide of 700 000 cubic metres

occurred in November 1960. Concrete injections were made in an attempt to strengthen the bedrock.

However, in 1963 a major slide occurred.  A 100m wave over topped the dam, killing 3000 people. Several factors contributed to the Vaiont disaster. The rocks making up the wall of the reservoir dipped down into the Vaoint valley, which facilitated movement under gravity. Alternating bands of limestone and clay allowed water to build up between permeable and impermeable layers, lubricating the sliding process. A number of fractures also increased the risk of movement. As the reservoir was filled, rocks near the edge were saturated and positive pore pressure increased.

The disaster could have been prevented if the slopes had been drained and the foot of the slope was stabilised. Small slides had previously occurred, and the history of the slides does not appear to have been taken into account when the dam and reservoir were originally planned.

The Vaoint Dam is a good example of how human influences outweighed the physical influences when causing a mass movement hazard.  However, it is contradictory in the way that a positive human influence turned into a negative one.