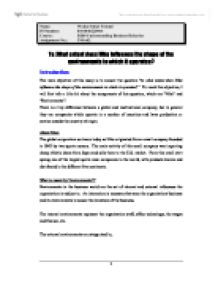 To What extent does Nike influence the shape of the environments in which it operates?

It is very important to address the impact of technology as it changed the structure of businesses and how marketing, distribution and manufacturing is processed. The development of IT enhanced the business confidence throughout the time and eventually we see more adventurous business strategies. * I have mentioned how technology created a poor skilled labour in the developed countries (e.g. USA the origin of Nike). Hence, this can be considered as a reason why most of the multinational and global corporations are driven to shift their production to the third world countries (developing countries), and eventually that has an economic impact in those countries. * The vast development in the technologies of observation, communication and computation led to a major shift in the way of marketing, advertising and distributing. It also affected the branding very much to the extent that brands and logos became a vital tool for the MNCs to expand. Branding, according to the technological development, led Nike to be familiar and helped it to become global. * On the other hand, Nike realized the effect of technological environment and took advantage of this in enhancing the designing role and the quality of its footwear. Using last advanced tools and measurement instruments to assure best of quality to its customers. ...read more.

* The tax policies in the country of origin (USA) encourage MNCs to shift production to nations with weaker fiscal or regulatory systems. * Nike's scandal of the mistreatment towards workers in the Southeast Asia produced (under the social pressure) many laws and regulations to seize such matter. One example is the Civil Rights Act (1991, USA), which reaffirms and tightens prohibition of discrimination; permits individuals to sue for punitive damages in cases of international discrimination. * The International Labour Organization (ILO) is an institute which monitors the labouring conditions. In 1994 and as a respond to the increased labour and working environment violation, the ILO adopted a new Declaration of Fundamental Principles and Rights at Work which sets out the main labour rights. * The North American Free Trade Agreement of 1993 is another example why MNCs move their production outside the borders. This law created a free-trade zone between the United States, Canada, and Mexico. Nike took advantage of this law and already has production on the borders between USA and Mexico. Conclusion: Organizations are not self-contained or self-sufficient. They interact with and are influenced by their environments. Organizations including global and multinationals depend on their environment as a source of inputs and as a recipient of their outputs. It is a two way connection. Total word count is: 2163. ...read more.