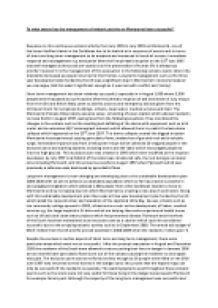 To what extent has the management of volcanic activity on Montserrat been successful?

﻿To what extent has the management of volcanic activity on Montserrat been successful? Response to this continuous volcanic activity from July 1995 to July 1999 on Montserrat, one of the lesser Antilles islands in the Caribbean has to be looked at in sequence of events and in terms of short and long term management to be analysed and measured in levels of success. Immediate response and management e.g. evacuation after the first phreatic eruption on the 18th July 1995 was well managed as they took pre-cautions as ?the preservation of human life is always top priority? however it is the management of this evacuation in the following volcanic events where the standards decreased as people returned to their homes. Long term management such as the three year development plan funded by the UK was a significant step in Montserrat?s recovery however you can argue that this wasn?t significant enough as it was met with conflict and ?rioting?. Short term management has been relatively successful, especially in in August 1995 where 5,000 people were evacuated as a pre-caution after the ...read more.

This exclusion zone was created in 1995 which were modified as the eruption developed, by July 1997 only 40km2 of the island was considered safe, the rest being an exclusion zone including Plymouth, and this proved successful in August 1997 when Plymouth which was previously a safe zone was destroyed by pyroclastic flows. Long term management is ever-changing and developing due to the sustainable development plan 2008-2020 with an aim to achieve a sustainable population which so far has proved successful in encouraging immigration which allowed 1,500 people from other Caribbean islands to move to Montserrat and by increasing tourism which Montserrat by creating a new airport and hotels. Along with this sustainable development plan there was a three year development plan funded by the UK which aided the reconstruction and relocation of the capital at Little Bay, houses, schools such as the community college opened in 2005, infrastructure such as the development of Salem, medical services e.g. the large hospital in St Johns which are helping those who experienced health issues such as silicosis and clean water projects which has prevented disease. ...read more.

Although the majority of the long term management was successful and significant in the re-development of Montserrat, the £2400 per person was met with riots due to the bad living conditions in the North. One of the main reasons for the death and destruction from these volcanic events is due to the failure of the government to act quicker. Professor Geoff Wadge predicted in the 1990’s the eruption of the Soufriere Hills and advised moving the South’s infrastructure to the North however he could only predict a 1% chance therefore this was not acted upon. Overall the management and response to this volcanic activity predicted danger, saved lives and is still giving hope to Montserrat’s survival with reconstruction and aid to encourage sustainability. The Montserrat Volcano Observatory were the most successful form of management which put their lives at risk by entering the exclusion zone and examining the crater. Although there was 19 deaths we must take into account the erratic nature of the eruptions and the volcanic surge which was unexpected and could not be predicted before it took place. ...read more.