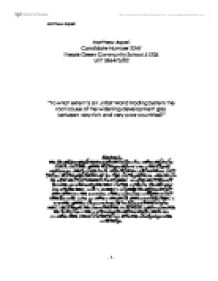 To what extent is an unfair world trade system the root cause of the widen development gap between the very rich and very poor?

Matthew Aspell Candidate Number 2247 Theale Green Community School 51235 Unit 5B6475/02 "To what extent is an unfair World Trading System the root cause of the widening development gap between very rich and very poor countries?" Abstract: The development gap between rich and poor countries has many factors, and although the trading system is one of the largest influences, others can be more important in certain times and places. Trading has relatively few rules and regulations, which can be exploited and whether or not an LEDC is exploited depends upon the government of the LEDC and the company developing inside the LEDC. MNC's in LEDC's can help development and stimulation of the economy, or they can cause corruption and further poverty. Some countries which are still considered LEDC's even though they are economically more powerful than many MEDC's leading to the answer that the World Trade System cannot be the root cause of the widening development gap otherwise countries like China and India would not be emerging on the world stage. Contents: Page 1: Title and Abstract Page 2: Contents page Page 3: Introduction What is development, and how is it affected by the World Trade System? The Development Gap Page 4: Definitions: Multinational Corporations Tariffs World Trade Organisation Economic Globalisation Page 5-6: Section 1: Fiat S.p.A's development in Brazil Page 7-8: Section 2: India's economic ...read more.

If the government continue its goal of massively expanding their manufacturing sector then India will become a target for developed-country protectionists. It is important to remember that although India has possibly the largest middle class in the world, it also has one of the largest groups of impoverished people. This is one illustration of the lopsided nature of economic growth in India nowadays. The economic growth has been largely received by the already rich, whereas the poor still struggle to escape from hunger. India is a prime example of a LEDC country who has grown economically, but also one where the inequalities of trade are apparent. India's economy has been growing at a sustainable rate over the last half a decade, but little of it has gone to the 828 million people who are living on below $2 a day. India shows us that LEDC's can develop at fast rates, at faster rates than most MEDC's, however the use of this profit is ultimately up to the government of the country. If a government is corrupt or the upper classes are in control, then the money will not be used for the betterment of those under the poverty line, which would lead to a development gap within a country, and essentially a growing gap in world development. ...read more.

MNC's can be a curse or a gift to a LEDC, and in the case of Fiat in Brazil, there has been reasonable economic growth provided. The militant attitude of the government attracted Fiat, and the strong work ethic means that many jobs have become available and will do so for some time. Brazil, a country where poverty is common and many people work in informal sectors, needs this type of fair development more than most. China is considered a LEDC, but has massive revenues of foreign exchange which has allowed them to begin a resource race buying up raw materials from other less fortunate LEDC's. In the case of China buying up Peruvian copper, it could be viewed as China paying for a resource that Peru could not develop at a very low price. There is debate as to whether this low offer that Peru would definitely accept is fair trade, but regardless of that, Peru had $3 billion to use for development, a huge amount for such a small country. The lack of regulations on the World Trading System allows exploitation and corruption to take place, but there are many other factors that are equally important when studying the increasing development gap, which differ with each particular case. Although the unfair system is an important issue other factors such as war, corruption and social development are all vital to consider. ...read more.