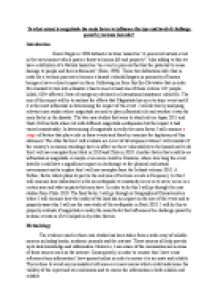 To what extent is magnitude the main factor to influence the type and level of challenge posed by tectonic hazards?

﻿To what extent is magnitude the main factor to influence the type and level of challenge posed by tectonic hazards? Introduction Garret Nagle in 1998 defined a tectonic hazard as ?A perceived natural event in the environment which poses a threat to human life and property?. Also adding to this we have a definition of a Natural hazard as ?an event or process that has the potential to cause damage to people and their settlements? (Ross, 1998). These two definitions infer that in order for a tectonic process to become a hazard it should happen in proximity of human beings or have a direct impact on them. Following on from this Em-Dat states that in order for a hazard to turn into a disaster it has to meet at least one of these criteria: 10+ people killed, 100+ affected, State of emergency declared or International assistance called for. The aim of this report will be to analyse the effects that Magnitude has on a tectonic event and if it is the most influential in determining the impact of the event. I will do this by analysing relevant case studies where magnitude seemed to play influential role and weather it was the main factor in the disaster. The two case studies that seem to stand out are Japan 2011 and Haiti 2010 as both where hit with different magnitude earthquakes but the impact it had varied considerably. In determining if magnitude is really the main factor I will examine a range of factors that play a role in these events and thereby, examine the legitimacy of this statement. ...read more.

It could be the case where a country is so poor that it simply cannot afford to maintain or start up hazard management or defence schemes as it would mean taking funds away from things that are perceived as important by the public such as: Healthcare. A perfect example of this could be seen in Haiti, January 2010. Where a 6.9 magnitude earthquake struck the capital city of Port-au-Prince. Haiti is seen as one of the poorest countries on the western side of the hemisphere, with 80% of the country?s population living below the poverty line. It has no natural resources and is largely dependent on agricultural farming. Also there is a major lack of emergency services with there being no military or air force. Due, to such severe conditions people are forced to build their homes on marginal land and on top of other people?s homes creating large shanty towns (BBC, 2010). They are also not able to keep to any building regulations due to a lack of resources and funding their homes are extremely venerable to any hazard. But, people are almost forced to live in such conditions as they have no other option. When the earthquake struck and although it?s a relatively lower magnitude than the one in Japan, its impacts are hardly comparable. With a death toll of over 316,000 and a further 300,000 injured due to collapsing buildings such as the hospital which left any aid available almost obsolete (Em-Dat, 2010). ...read more.

Conclusion To conclude, I believe the overall statement that magnitude is the most influential factor in influencing the level of challenge posed by tectonic events is true in some aspects. As it is needed for any tectonic event to actually become a hazard as in order for it poses any threat to human life it must have the energy to do so. This can be clearly seen in the case study of Japan 2011, where even though the country seemed appropriately prepared for such a hazard the sheer size of the event bypassed any defences. Whereas, if it was a lower scale event it would not have caused so much damage. However, I don?t believe that magnitude in itself is the most influential factor. Although, it is needed in the process I believe that in each individual case a mix of factors is used to determine the level of challenge. For example, in Haiti where the magnitude was not really an important factor in the outcome and most influential factor was actually Level of development. To sum up, I believe that Magnitude is an influential factor but no factor by itself is the most influential and that a mixture of factors add up to determine the level of challenge posed by a tectonic event. Are you suggesting that the combination of factors might actually vary depending on where the event takes place and the specific characteristics and combination of factors in each location? You could reach this conclusion and include it to really round your argument off. This is a big improvement Mert. ...read more.