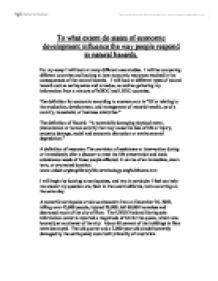 To what extent do states of economic development influence the way people respond to natural hazards. For my essay I will look at many different case studies. I will be comparing different countries and looking at how economic resources resulted in the consequences of the natural hazards. I will look at different types of natural hazard such as earthquakes and tornados, as well as gathering my information from a mixture of MEDC and LEDC countries. The definition for economic according to answers.com is "Of or relating to the production, development, and management of material wealth, as of a country, household, or business enterprise." The definition of Hazard: "A potentially damaging physical event, phenomenon or human activity that may cause the loss of life or injury, property damage, social and economic disruption or environmental degradation." A definition of response: The provision of assistance or intervention during or immediately after a disaster to meet the life preservation and basic subsistence needs of those people affected. It can be of an immediate, short-term, or protracted duration. www.unisdr.org/eng/library/lib-terminology-eng%20home.htm I will begin by looking at earthquakes, and two in particular I feel can help me answer my question are, Bam in Iran and California, both occurring on the same day. A powerful earthquake struck southeastern Iran on December 26, 2003, killing over 43,000 people, injured 20,000, left 60,000 homeless and destroyed much of the city of Bam. ...read more.

People had had prior warning as to what to do in an earthquake situation, i.e. get low and in a place were objects are unlikely to fall. Simple warning like these would have been invulnerable in situations like this and the knowledge that the Americans had far out did the people of Iran who had little idea of what to do in such an emergency. Even though the American government knew the death toll was not high emergency services and NGO's were immediately on hand to help with any injuries sustained. Overall there were very few deaths in California due to prior preparation. This meant that everybody knew what they were doing. Buildings were stable and earthquake proof allowing people to be protected and not risk serious injury. Prior warning to the event ensured that people were ready for the disaster, although they did not know when the earthquake was going to hit, they knew that it might be around that time. In bam however people were not ready for an earthquake and many people lost there lives as there houses fell around them. I will now begin to look at the volcano mount saint Helens and its eruption in 1980, killing 57 people. This case study is an example of how even MEDC countries do not always predict the correct outcomes or even natural hazards at all. ...read more.

As the area is an LEDC people are not aware of the dangers of cutting down trees, which was a main benefactor into why the landslide occurred. In this example the LEDC government ad no way of predicting the landslide but could have made people aware of the dangers and the increased likelihood of landslides if trees are cut down in tropical weather systems. In conclusion I believe that MEDC countries such as the United States deal with hazards on a whole very well, from prediction to after the event. This is without doubt because of the vast amounts of money and resource being thrown at prediction and natural disaster "action plans". Because of the huge funds available, proper research is produced enhancing prediction, meaning that the gap between the technology between MEDC and LEDC is getting bigger. I feel that I now have evidence that nine out of 10 times economic variation can affect hazards a great deal. I feel that economic variation has meant that difference between life and death as we have seen in the case studies. However I feel that on occasion such as hurricane Katrina or Mount Saint Helens, no amount of research or economic resource can prepare you for such disasters. However damage can be minimized by financial backing ultimately meaning that the frequency of huge death tolls and huge amounts of damage in MEDC is dramatically decreased. ...read more.