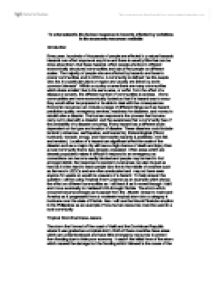 To what extent is the human response to hazards affected by variations in the economic resources available Introduction Every year, hundreds of thousands of people are affected by natural hazards. Hazards can affect anyone at any time and there is usually little that can be done about them. But these hazards affect people who live in different economically structured communities and can affect people on different scales. The majority of people who are affected by hazards are those in poorer communities and in LEDCs. A community is defined "as the people who live in a particular place or region and usually are linked by some common interests". Within a country or area there are many communities which share a belief, live in the same area, or suffer from the effect of a disease or poverty, the different number of communities is endless. Some communities are more economically funded so that if a hazard was to occur they would either be prepared or be able to deal with the consequences. Economic resources can include a range of different things such as hazard prediction quality, emergency services, readiness for disasters, and money to rebuild after a disaster. The human response is the process that humans carry out to deal with a disaster and the awareness that a community has of the probability of a disaster occurring. ...read more.

This shows that Haiti as an LEDC was unequipped to cope with the storm. As the storm moved over to the US coast it entered a well developed country which was prepared for the storm. This is where the storm showed its full force throwing winds of 120mph on the Atlantic coast near Stuart before striking the gulf coast. Houses where boarded up, the states sophisticated detection system gave the community and emergency services details of the scale, time and strength of the hurricane which reached a category 4 which is the strongest to hit the region for many years and the people where ready. Those most at risk evacuated to safe locations, emergency services prepared themselves to save anyone at risk, people in less risk areas boarded their windows up and prepared themselves. As the storm hit is caused damage to buildings as shown in the pictures below and caused flooding such as on the golf course on the right which was in the Jupiter region on the north east coast of Florida near the NASA space centre. But even thought there was a huge force storm that hit the state there was a death toll of only 108 and it was the biggest storm for many years. This shows that more economically countries can cope better as they fund protection from the storms which is reflected in the death toll although there was a lot of damage but the main aim of a countries government is to save lives. ...read more.

that have already buried numerous towns, villages and fields. As a result of the quick reactions, only 300 people became victims to the hazard. The picture below shows the extent to which the ash was emitted from the volcano: Conclusion From the case studies used it is clear to see that there was a huge difference between the human responses to big hazards in densely populated communities which has show the low death toll in Florida when hit with one of the strongest storms for decades compared to the country of Haiti which had had past experience of storms earlier in the year and had such a high death toll in both events shows that they had little money to protect the population and structures from the storms. And deforestation in the country shows they are more concerned in boosting the economy by selling tree wood than protecting the area which the trees would have done. At Mount Pinatubo it shows the effect of a rural community that is sparsely in a developing community. Only 300 hundred people died out of 200,000 in the mountain villages compared with the 2000 in the Haiti's capital which shows that even an LEDC can cope with hazards simply by just evacuating and taking other scientists information to help them as the human response is good for the economic resources they have. Showing that LEDCs can cope if they make themselves aware of the risk of the hazard. ...read more.