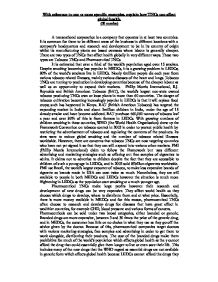 Transnational corporations. There are two types of TNCs that affect health globally in very different ways. These two types are Tobacco TNCs and Pharmaceutical TNCs.

With reference to one or more specific examples, explain how TNCs can affect global health.

A transnational corporation is a company that operates in at least two countries. It is common for there to be different areas of the business in different locations with a company’s headquarters and research and development to be in its country of origin whilst its manufacturing plants are based overseas where labour is generally cheaper. There are two types of TNCs that affect health globally in very different ways. These two types are Tobacco TNCs and Pharmaceutical TNCs.

It is estimated that over a third of the world’s population aged over 15 smokes. Despite smoking becoming less popular in MEDCs, it is a growing problem in LEDCs; 80% of the world’s smokers live in LEDCs. Nearly 6million people die each year from various tobacco related illnesses, mainly various diseases of the heart and lungs. Tobacco TNCs are turning to production in developing countries because of the cheaper labour as well as an opportunity to expand their markets.  Phillip Morris International, R.J. Reynolds and British American Tobacco (BAT), the world’s largest non-state owned tobacco producing TNCs own or lease plants in more than 60 countries. The danger of tobacco cultivation becoming increasingly popular in LEDCs is that it will replace food crops; such has happened in Kenya. BAT (British American Tobacco) has targeted the expanding market in India and about 5million children in India, under the age of 15 already smoke and have become addicted. BAT purchase 460,000 tonnes of tobacco leaf a year and over 80% of this is from farmers in LEDCs. With growing numbers of children smoking in these countries, WHO (the World Health Organisation) drew up the Framework Convention on tobacco control in 2003 in order to protect public health by restricting the advertisement of tobacco and regulating the contents of the products. Its aims were to reduce global smoking and the number of tobacco related illnesses worldwide. However, there are concerns that tobacco TNCs are now targeting countries who have not yet signed it so that they can still expand into various other markets. PMI (Phillip Morris International) claim to follow the Framework but uses different advertising and marketing strategies such as offering out free samples of cigarettes to adults. It claims not to advertise to children despite the fact that they are accessible to children of such a young age in LEDCs, and in 2005 sold 85billion cigarettes worldwide. PMI use Brazil, the world’s largest exporter of tobacco, to make less expensive brands of cigarette as brands made in USA can cost twice as much. Nonetheless, they are still available to people in both MEDCs and LEDCs however the situation is much more frightening in LEDCs as the population start smoking at a much younger age.

Pharmaceutical TNCs make large profits however their research and development of new drugs can be very expensive. They affect world health as they choose which drugs to develop, where to distribute them and at what price. Essentially, there is more money available in MEDCs and for this reason, pharmaceutical TNCs often choose to research and develop drugs for diseases that have great affect in wealthier countries, for example CHD, blood pressure and various forms of cancers.

Pharmaceuticals can be sold under two broad categories, either branded or generic. Branded drugs are more expensive, between 3 and 30 times the price of the generic drug, and in MEDCs, the consumer has little or no choice in what they use as they go off the advice given by the doctor. Because of this, pharmaceutical companies target doctors with various marketing strategies, free samples and advertising in order to get them to work alongside, distributing their products. The cost of the branded drugs make them prohibitive for much of the world’s population which affects global health as they cannot afford the drug that could essentially give them longer to live or even save their life. This includes many of the new drugs that the WHO regard as essential drugs are not available in generic form which affects global health because LEDCs cannot afford the drugs they need. For this reason, pharmaceutical companies are criticised as they tend to invest more money into the research and development of drugs to help diseases of affluence rather than diseases of poverty, the money for which comes from profit of selling other drugs. Some pharmaceutical TNCs do use the profits of drugs in wealthier companies to subsidise research into diseases affecting poorer companies, for example vaccines against Malaria. GCSK (GlaxoSmithKline) is the biggest UK based pharmaceutical TNC producing a wide range of different drugs and health care products. It produces almost 4billion packs of medicines and health care products a year including a quarter of the world’s vaccines. GCSK is an example of a pharmaceutical TNC that donates drugs to poorer countries including 750million albendazole tablets to treat 130million people with elephantiasis. They also donate 3.8% of pre-taxed profits, approx. £282million to help people in need.