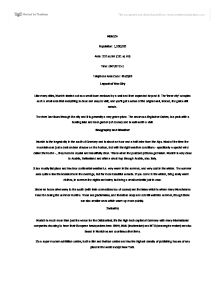 MUNICH Population: 1,300,000 Area: 310 sq km (121 sq mi) Time: GMT/UTC+1 Telephone Area Code: 49-(0)89 Layout of the City Like many cities, Munich started out as a small town enclosed by a wall and then expanded beyond it. The 'inner city' occupies such a small area that everything is close and easy to visit, and you'll get a sense of the orignal wall, indeed, the gates still remain. The river Isar flows through the city and it is generally a very green place. The enormous Englischer Garten, is a park with a boating lake and beer garden (of course) and is well worth a visit. Geography and Weather Munich is the largest city in the south of Germany and is about an hour and a half drive from the Alps. Most of the time the mountains are just a dark unclear shadow on the horizon, but with the right weather conditions - specifically a special wind called the Foehn - , they become crystal and beautifully clear. This is when the postcard pictures get taken. Munich is very close to Austria, Switzerland and after a short hop through Austria, also Italy. It is a mostly flat place and has true continental weather i.e. very warm in the summer, and very cold in the winter. The summer sees quite a few thunderstorms in the evenings, but far more beautiful sunsets. If you come in the winter, bring really warm clothes, in summer the nights are balmy but bring a small umbrella just in case. Under an hours drive away to the south (with train connections too of course) are the lakes which is where many Muncheners head for during the summer months. These are glacial lakes, and therefore deep and cold till well into summer, though there are also smaller ones which warm up more quickly. Industry Munich is much more than just the venue for the Oktoberfest, it's the high-tech capital of Germany with many international companies choosing to have their European headquarters here. ...read more.

or 66 (to Alter Messeplatz, Theresienh�he or Hans- Fischer-Stra�e) Tram: 18 (to Hermann-Lingg-Stra�e) or 19 (to Hermann- Lingg-Stra�e) Entry Fees There is no entry fee as such, you just pay for whatever is there, i.e. beer, food, fairground rides and so forth. A litre jug of beer is expensive at around 11 Euro, but you won't be able to cope with many in any case. RIO DE JANEIRO . Car Rentals The main car rental companies have branches in Rio de Janeiro. Reservations should be made at the point of origin. Should the visitor require a rented car for a day or two during his stay, the Concierge of the hotel will be able to make the necessary arrangements. Currency The Brazilian currency is the Real (R$); there are 100 centavos in one Real. Coins issued by the government are either bronze-coloured for 1 centavo, silver for 5, 10, 25 and 50 centavos and a nickel and bronze coin for R$1. R$1, R$2, R$5, R$10, R$20 R$50 and R$100 are the denominations of the notes. Hours of Business Office hours are usually from 9 am to 6 pm. Stores normally open at 9 am and close at 7 pm. Lunch is usually taken from 12 pm to 2 pm. Most offices are closed on Saturdays and Sundays. Medical Services Most hotels have immediate access to on-call 24-hour medical assistance. There are also many government and private hospitals with 24-hour emergency and out-patient departments. Many of Rio de Janeiro's doctors and dentists were trained or have undergone postgraduate training overseas. All hotels have lists of recommended medical services. Safety and Security As in any city in the world of the size of Rio de Janeiro, the key to an uneventful stay is to protect yourself from pickpockets and carry as little cash and as few valuables as possible. The Rio de Janeiro military police and the municipal guard corps have stations and reporting centres. ...read more.

It always has pleasant surprises for the public. In Cinel�ndia, the open-air party lasts for five days to the sound of acclaimed orchestras and singers, symbols of carnival music, reviving thus the carnival balls of the past. POPULAR DANCES From Saturday to Tuesday, open-air dances take place throughout the city. The emphasis is on joy and spontaneity. OFFICIAL COSTUME COMPETITION Sumptuous or original costumes are elements of a theatrical performance in the halls of Hotel Gl�ria, on the afternoon of the Saturday of carnival. The huge and dazzling costumes represent historical characters or different concepts, according to the imagination of the gentlemen, ladies and of drag queens that participate in the event. ORIGINAL REVELER CONTEST An instantaneous stage for street carnival, this is the contest for the anonymous artist and the enthusiastic reveler with their fantastic costumes. The prizes go to the best Group,Cl�vis, Adult and Junior Individual. The party closing the contest takes place in Cinel�ndia. BANDSTAND COMPETITION The competition takes place throughout the city with the direct participation of inhabitants of the different districts, who are responsible for the decoration and liveliness of the bandstands. The prizes take into consideration creativity, colors, lightening and enthusiasm. BLOCOS DE EMBALO, BANDS AND STREET GROUPS It is the heart of carnaval, which beats on Av. Rio Branco, in the Center of town, that presents from Saturday to Tuesday the greatest variety of blocos de Embalo e Empolga��o, and it is where the merry-making is at its wildest with traditional groups such as Cord�o da Bola Preta, Cacique de Ramos, Bafor da On�a, to mention just a few. A visit in the end of the afternoon is always entertaining. In the districts, specially in the zona sul districts of G�vea, Ipanema, Leblon, Copacabana and Botafogo, the bands and street groups anticipate their carnival in the pre-carnival rehearsals. CARNAVAL DANCES The Ball at Copacabana Palace Hotel is the high point of the Saturday. Scala nightclub promotes thematic dances every night and closes the festivities with the Gala Gay ball. Other nighclubs and clubs organize animated costume balls for adults and children. ...read more.