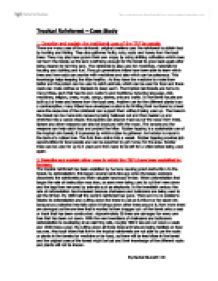 Tropical Rainforest - Case Study 1. Describe and explain the traditional uses of the TRF by people There are many uses of the rainforest: original dwellers used the rainforest to obtain food by hunting and fishing. They also gathered fruits, nuts, roots and honey from the local trees. They may also have grown their own crops, by doing shifting cultivation which does not harm the forest, as the land is left long enough for the forest to grow back again after being cleared for farming land. The rainforest is also used for medicines, materials for housing and clothing and fuel. Through generations tribes have been able to learn which trees and tree roots can provide with medicines and also which can be poisonous. This knowledge helps keeping the tribe healthy. As they have the medicine to make them better and the poison can be used to catch animals, which can be used for food and there coats can make clothes or blankets to keep warm. The tropical rainforests are home to many tribes, each that has its own customs and traditions, including language, diet, medicines, religion, dress, music, songs, stories, arts and crafts. In the forest houses are built out of trees and leaves from the local area. Another use for the different plants is as a contraceptive; many tribes have developed customs for limiting their numbers to a level were the resources of the rainforest can support them without being used up. ...read more.

All these different jobs provide money when exported which can be used to help Brazil get out of debt and to make their lifestyles better as the areas have more money to spend on education or facilities for a village. 4. What are the negative impacts of exploitation on; a) The natural environment in the Tropical Rain Forest b) People A) There has been a countless loss of birds, insects, reptiles and mammals which found the food and habitats in the forest, together with numerous species of tree. A typical patch of rainforest, 10km� may contain as many as 1500 species of flowering plants, 750 species of tree, 400 species of bird, 150 varieties of butterfly, 100 different reptiles and 60 types of amphibian. These numbers may decrease as the forest is being cut down and species become extinct or find somewhere else to live. It has taken millions of years for the vast numbers of plant and animal species to evolve, many of which have not been recorded yet and when the rainforest is destroyed many species will be lost forever. Also, in the hot wet climate fallen leaves soon decompose and the nutrients released are taken up again by the vegetation. If the trees are removed, the nutrient cycle is broken and existing nutrients are rapidly washed out of the soil leaving it infertile. Most of the nutrients in a rainforest are locked up in the plants. These nutrients are lost from the forest when timber is removed. ...read more.

For instance if a cattle rancher cut down and burnt 5 aches of forest every time he wanted to move his cattle then I feel that I can not be conserved and exploited at the same time because eventually their will not be any areas of rain forest left that are fertile enough for any forest to grow on again. However, rubber tapping is a sustainable way in which the forest is exploited as it does no harm the forest and so therefore I feel that the rainforest can then be exploited and conserved at the same time. Because the rubber tapping does not damage the trees and this means that animals can still use the forest as a habitat and find enough food for them not to become extinct. The management techniques that in place would also change my opinion because if their was no management techniques in place and the rainforest was just being used to cut down every tree then it would disappear very quickly but if a tree was planted for every one that is cut down then the forest would be able to remain for longer. Also if the new logging was used the forest is being exploited but being conserved at the same time as not as many trees are getting damaged. So overall I feel it is possible to conserver the forest as well as exploiting it, but it depends on how it is being exploited and how it is being conserved. ?? ?? ?? ?? By Rachel Burnett 11R ...read more.