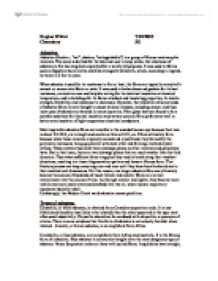 Types of asbestos and Asbestos-related diseases.

Eugine Whint 7/12/2005 Chemistry 5G Asbestos. Asbestos (Greek a-, "not"; sbestos, "extinguishable") is a group of fibrous metamorphic minerals. The name is derived for its historical use in lamp wicks; the resistance of asbestos to fire has long been exploited for a variety of purposes. It was used in fabrics such as Egyptian burial cloths and Charlemagne's tablecloth, which, according to legend, he threw in a fire to clean. When asbestos is used for its resistance to fire or heat, the fibres are typically mixed with cement or woven into fabric or mats. It was used in brake shoes and gaskets for its heat resistance, on electric oven and hotplate wiring for its electrical insulation at elevated temperature, and in buildings for its flame-retardant and insulating properties, its tensile strength, flexibility, and resistance to chemicals. However, the inhalation of some kinds of asbestos fibres is now thought to cause various illnesses, including cancer, and thus most uses of asbestos are banned in many countries. Fibre glass has been found to be a suitable substitute for thermal insulation and woven ceramic fibre performs as well or better as an insulator of high-temperature electrical conductors. Most respirable asbestos fibres are invisible to the unaided human eye because their size is about 3.0-20.0 �m in length and can be as thin as 0.01 �m. ...read more.

Asbestos-related diseases Asbestosis and cancer Strong concerns about the health hazards associated with asbestos had been described many times over the years such as the "evil effects of asbestos dust", the "sharp, glass like nature of the particles" when allowed to remain in the air in any quantity, "have been found to be injurious, as might have been expected". The fine asbestos fibres are easily inhaled, and can cause a number of respiratory complaints, including a potentially serious lung fibrosis called asbestosis. Exposure to asbestos has also been determined to cause a very serious form of cancer, mesothelioma, which occurs in the chest and abdominal cavities. This aggressive disease is not properly referred to as a lung cancer, as the malignant cells are derived from the mesothelium, a tissue found on the inner walls of the chest and abdominal cavities and on the outer surface of the lungs rather than in the lung itself. When inhaled, asbestos is carcinogenic. Asbestos diseases include mesothelioma, asbestosis, lung cancer, and gastrointestinal cancer. Asbestos has a synergistic effect with tobacco smoking in the causation of lung cancer. Other asbestos-related diseases Asbestos warts - caused when the sharp fibres lodge in the skin and are overgrown causing benign callus-like growths. ...read more.

An asbestos-containing building that is to be torn down may have to be sealed, and to have its asbestos safely removed first before ordinary demolition can be performed. The asbestos removal may take longer and cost more than the actual tearing-down of the building. Controversy. The controversy over the prohibition of all forms of asbestos, when some have been found, in some studies, to have no harmful effects. For example, "white asbestos", chrystile, is still used in many countries because of its apparent harmlessness. The question of why asbestos is also banned in circumstances where inhalation is nearly impossible, such as when it's being included in sealed areas already dangerous to human beings, instead of simply when it might be used as insulation in a ventilated area, or other similar cases which actually expose it to people against their will. Where asbestos has been banned, its roles must be taken by products which are often either inferior, or far more expensive. This has a negative impact on society as a whole, which (especially if the previous arguments are true in whole or part) may be greater than the benefit of its removal. In fact, as with DDT and CFCs, some of the promotion of the ban has been financed by the very companies which sell more expensive or less effective alternatives, leading to an ironic charge of corporate greed as the motivation behind environmental concerns. ...read more.