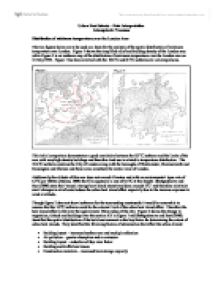 Urban Heat Islands - Data Interpretation Atmospheric Processes Distribution of minimum temperature over the London Area The two figures below are to be used as a basis for the analysis of the spatial distribution of minimum temperature over London. Figure 1 shows the simplified relief and building density of the London area while Figure 2 is an isotherm map of the distribution of minimum temperature over the London area on 14 May 1959. Figure 1 has been overlaid with the 10.6oC and 8.3oC isotherms to aid comparisons. This initial comparison demonstrates a good correlation between the 8.3oC isotherm and the limits of the area with very high density buildings and therefore land use is related to temperature distribution. The 10.6oC isotherm contains the City of London along with the boroughs of Westminster, Hammersmith and Kensington and Chelsea and these areas constitute the central zone of London. Additionally the altitude of this area does not exceed 61metres and with an environmental lapse rate of 6.5oC per 1000m (Ahrens, 1999) the 61m equates to a loss of 0.4oC at this height. Shahgedanova and Burt (1998) state that 'annual average heat-island intensity seldom exceeds 2oC' and therefore relatively small changes in relief could reduce the urban heat island effect especially due to the increase exposure to wind at altitude. ...read more.

Radiation is reduced due to multiple reflections and absorption by the materials of the built environment. Wind speeds are reduced overall within a city though localised channelling can occur due to building lay out and this limits heat loss from the city. It is this reduction in the ability of an urban area to dissipate heat that causes urban heat islands. Variations in relative humidity across the London area Figure 3 shows the highly complex distribution of relative humidity across London and there seems to be a clear trend of reduced humidity towards the centre. However the cross section shows a distinct rise in humidity over the river Thames and this large body of water would increases evaporation and therefore humidity in this linear corridor. The Thames also passes through the hottest part of the heat island and this would also increase evaporation. Urban heat island are a mosaic of microclimates and the high variation displayed in figure 3 is likely to be due to very localised land use for example an area of vegetation like a park which would have localised evaporation. Overall humidity will be lower in the built environment as there are fewer water bodies, a lower rate of evapotranspiration and more rapid runoff of water (Foskett and Foskett, 1992). ...read more.

Kew has a relative high level of vegetation and therefore higher levels of humidity and water vapour, it is also within a fairly high isotherm. However it would be slightly windier, slightly less pollution and therefore condensation nuclei. These conditions therefore reduce the frequency of conditions for fog formation but when conditions are suitable dense fogs are likely to form. London Airport is at the boundary of the urban heat island and therefore temperature will be similar to the surrounding rural area also the prevailing wind is uninhibited by the built environment and therefore it will be windier. Humidity will be higher due to increase proportion of vegetation and there will be significant localised pollution from the airport. These conditions will counteract each other to a certain extent and therefore fog occurrence is only slightly greater than South-East England though is more likely to be dense due to the additional condensation nuclei originating from the airport. Finally the mean of the 7 stations of South-East England should provide a representative frequency of fog occurrence outside of the urban heat island. This can be used as a reference to compare the three sites within the urban heat island. If you calculate the frequency of fog compared with the intensity the site at Kew has the most fog followed by London Airport, Kingsway and finally South-East England. Kew tops this calculation because it has an idea mixture of condensation nuclei (pollution), temperature, humidity and calm wind conditions. ...read more.