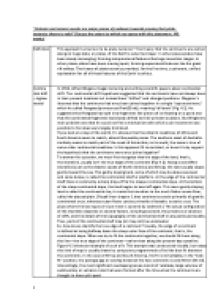 Volcanic and seismic events are major pieces of evidence towards proving that plate-tectonics theory is valid Discuss the extent to which you agree with this statement. [40 marks]

﻿?Volcanic and seismic events are major pieces of evidence towards proving that plate-tectonics theory is valid? Discuss the extent to which you agree with this statement. [40 marks] Definition 1. This approach turned out to be plate tectonics?the theory that the continents are carried along on huge slabs, or plates, of the Earth?s outermost layer. In other places plates have been slowly converging, forming compressional features like huge mountain ranges. In other places plates have been moving apart, forming expansional features like the great rift valleys. The theory of plate tectonics provided, for the first time, a coherent, unified explanation for all of these features of the Earth?s surface. Continental drift ? Jigsaw model 1. In 1910, Alfred Wegener began lecturing and writing scientific papers about continental drift. The continental drift hypothesis suggested that the continents have not always been in their present locations but instead have ?drifted? and changed positions. Wegener?s idea was that the continents had once been joined together in a single ?supercontinent,? which he called Pangaea (pronounced PanJEE-ah), meaning ?all lands? (Fig. 4.1). He suggested that Pangaea had split into fragments like pieces of ice floating on a pond and that the continental fragments had slowly drifted to their present locations. But Wegeners main problem was that he could not find a mechanism with which such movement was possible to his ideas were largely dismissed. 2. If you look at a map of the world, it?s obvious that the Atlantic coastlines of Africa and South America seem to match, almost like puzzle pieces. The southern coast of Australia similarly seems to match part of the coast of Antarctica, to its south; the same is true of some other continental coastlines. Is this apparent fit an accident, or does it truly support the hypothesis that the continents were once joined together? 3. To answer this question, we must first recognize that the edge of the land, that is, the shoreline, usually isn?t the true edge of the continent (Fig. 4.2). ...read more.

They plotted the pathways of the poles on maps and referred to the phenomenon as apparent polar wandering (Fig. 4.10). Geophysicists were puzzled by this evidence because they knew that the Earth?s magnetic poles and its axis of rotation are always close together. When it was discovered that the path of apparent polar wandering measured in North America differed from that measured in Europe, geophysicists were even more puzzled. They knew that it was extremely unlikely that the magnetic poles had moved. Instead they concluded, somewhat reluctantly, that it must have been the continents themselves that had moved, carrying their magnetic rocks with them. Thus, the apparent polar wandering path of a continent, determined from the paleomagnetism of rocks of different ages, provides a historical record of the movement of that continent relative to the positions of the magnetic poles. Note from Figure 4.10 that the apparent polar wandering paths of Europe and North America are separate from 600 million years ago to about 50 million years ago. You might also notice that the shapes of the paths look rather similar. In fact, if you rotate Europe and North America from their present positions and reassemble them as a single continent, as if the Atlantic Ocean weren?t there, an interesting thing happens: the two paths overlap and fit together exactly. This indicates that Europe and North America were moving together as a single continent during, the several hundred million years represented by these paths. This was?and still is?a very powerful argument for the existence, long ago, of a supercontinent that eventually split into separately moving pieces. How can the apparent wandering of the magnetic poles be best explained? As paleomagnetic research progressed during the 1950s, some unexpected results emerged. When geologists measured the paleomagnetism of geologically recent rocks, they found it was generally consistent with Earth?s current magnetic field. The paleomagnetism of ancient rocks, though, showed different orientations. ...read more.

Another example is the fresh water reptile, Mesosaurus, which was also found in southern Brazil and South Africa, both in Permian-aged rocks, and given that it was less than ½ metre long and was unable to swim in salty water it is inconceivable how it would have travelled across Atlantic Ocean to inhabit these two areas. In both examples the rock structure in which the fossils were found was very similar giving further evidence to support the plate tectonics theory. The deposits left by glacial ice sheets provide further evidence towards proving the plate tectonics theory. As glacial ice moves, it striates the underlying rocks and produces folds and wrinkles in soft sediments whilst depositing layers of till. These features left behind in glacial deposits provide evidence of the direction the ice was moving during the glaciation. For instance in South America and Africa there are very thick glacial till deposits both from the Permian-Carboniferous age. The deposits match almost exactly when the continents are moved back together. Using Africa and South America as an example, when they are moved back together, the direction of ice movement on both continents is consistent, radiating outward from the center of the former ice sheet. The extent of this evidence implies two lines of evidence both supporting plate tectonics. Firstly due to the distance between Africa and South America it is highly unlikely that a glacier could have existed that spanned the whole Atlantic Ocean and secondly, the practically identical features suggests that both South America and Africa were at the same equatorial locations, in order to have similar climates as such a glacier could not form in present conditions, hence they must have been once joined together in Gondawana as it is consistent with the findings that have been discussed. It’s hard to imagine how such similar glacial features could have been created if the continents had not once been joined together. Africa and South America must have had similar climates during this period, colder than their present-day climates. This also suggests that they were not in their present equatorial locations. ...read more.