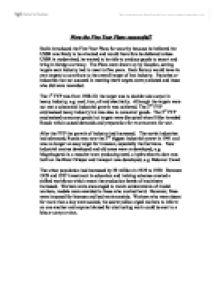 Were the Five Year Plans successful?

Were the Five Year Plans successful? Stalin introduced the Five Year Plans for security because he believed the USSR was likely to be attacked and would there fore be defeated unless USSR is modernized, he wanted to be able to produce goods to export and bring in foreign currency. The Plans were drawn up by Gosplan, setting targets each industry had to meet in five years. Each factory would have its own targets to contribute to the overall target of that industry. Factories or industries that not succeed in meeting there targets were punished and those who did were rewarded. The 1st FYP was from 1928-32; the target was to double take output in heavy industry, e.g. ...read more.

Belomor Canal. The urban population had increased by 29 million in 1929 to 1939. Between 1929 and 1937 investment in education and training schemes created a skilled workforce which meant the production levels of machinery increased. Workers were encouraged to match achievements of model workers, medals were awarded to those who worked hard. However, fines were imposed for lateness and bad workmanship. Workers who were absent for more than a day were sacked, the secret police urged workers to inform on one another and anyone blamed for obstructing work could be sent to a labour camp or shot. Women were encouraged to work to help to achieve plans and to have children because of the falling population, facilities such as cr�ches were provided in factories to help them have children and to work. ...read more.

Crime rate increased due to alcoholism and juvenile delinquency. Although for some of the population the consequences of the FYP was not too great because of the housing and food situation and the harsh treatment if targets were not met but I think on the whole the FYP was very successful. Production levels had increased and Children received free education and free health care schemes were extended. The unemployment rate had decreased and those who had a good job such as scientist and engineers were happy because they had good lifestyle and good pay. The Five Year Plans did bring benefits to Russia as an industrial country but there were downsides. In 1928 Russia was at risk of invasion but ten years later it was the 2nd most industrial power. ...read more.

Overall a good review of the Five Year Plans and some of the impacts that they had. To improve, further statistics could have been used to provide evidence for the points made and references could have been given.
4 stars