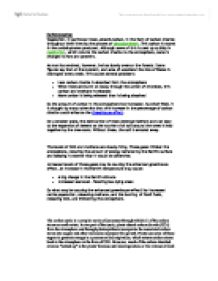 What are the effects of Deforestation?

Deforestation Vegetation, in particular trees, absorb carbon, in the form of carbon dioxide throughout their lives by the process of photosynthesis. This carbon is stored in the carbohydrates produced. Although some of this is used up quickly in respiration, which returns the carbon dioxide to the atmosphere, some is changed to fats and proteins. As man has evolved, however, he has slowly overrun the forests. Some figures say that at the moment, and area of woodland the size of Wales is destroyed every week. This causes several problems: * Less carbon dioxide is absorbed form the atmosphere * When trees are burnt or decay through the action of microbes, this carbon and methane is released * More carbon is being released than is being absorbed So the amount of carbon in the atmosphere has increased. So what? Well, it is thought by many scientists that this increase in the percentage of carbon dioxide could enhance the Greenhouse effect. On a smaller scale, the destruction of trees destroys habitats and can lead to the expansion of deserts as the nutrient rich soil around the trees is held together by the tree roots. Without these, the soil is erroded away. The levels of CO2 and methane are slowly rising. These gases thicken the atmosphere, reducing the amount of energy radiated by the Earth's surface and keeping it warmer than it would be otherwise. Increased levels of these gases may be causing the enhanced greenhouse effect. An increase in the Earth's temperature may cause: * A big change in the Earth's climate * Increased sea level - flooding low-lying areas So what may be causing the enhanced greenhouse effect? An increased cattle population, releasing methane, and the burning of fossil fuels, releasing CO2, are thickening the atmosphere. The carbon cycle is a complex series of processes through which all of the carbon atoms on earth rotate. ...read more.

From these figures, the data obtained through experimental procedures can be more easily visualized and explained. Disruptions to the Amazonian nitrogen cycle can be studied on both global and local scales. Considered globally, we can see human contributions to increased nitrous oxide levels (greenhouse gases) in the atmosphere due to slash-and-burn techniques for clearing the land. This method is combustion of organic matter, causing a release of this biological nitrogen in the form of N20 and NOx at a estimated global rate of 40 Tg (1012) per year . Observed on a local scale of the Amazon basin itself, increases in fertilizer use have certain consequences for the native vegetation. The most measurable effect is that of water contamination due to fertilizer run-off. When excess nitrogen is applied to a region in the form of fertilizers, it is not retained by the soil as added fertility. Rather, this nitrogen (in the form of NO3-) is leached from the soil into the surrounding water system. This leads to eutrophication of surrounding bodies of water . In the soil itself, this process depletes the reservoir of positive ions (Ca2+, K+, etc.), which are transported with the negative nitrate ions. The presence of this available nitrogen also disrupts the natural nitrogen fixation sequence, as microorganisms are no longer required to provide a nitrogen source for the surrounding vegetation, and thus no longer participate in fixation . This presumably adds to the complexity for any kind of land rehabilitation, as the natural nitrogen fixation has been temporarily disabled. Not only is the use of the land disruptive to the nitrogen cycle, but also its conversation to such uses. When land is initially stripped of its natural vegetation, the decaying biomass infuses the soil with nitrogen compounds. If left fallow, this nitrogen is leached away, again with associated cations, as there are no roots to absorb it . Also, without vegetative cover, decomposer, such as worms and termites, and microorganism populations, important for nutrient cycling, are diminished . ...read more.

These toxins - often mercury-based compounds - not only kill animals and plants, they can affect the microorganisms as well. The microorganisms are at the bottom of the food chain. Their survival is essential for the survival of all the other species. Sad as it may be to lose something as beautiful as one of the jungle cats to extinction, through human abuse of the rainforest, the forest itself and most fauna would survive nevertheless. Loss of rainforest microbes, however, would have a severe effect throughout the entire rainforest ecology. The rainforest is dependent upon the actions of microbes, to sustain the base-level of food supply. Microbes dispose of dead matter by decaying and rotting it. They provide nutrients both from their by-products and from themselves, for other usually larger and more complex life-forms - they are food. Many species of animal and plant could consequently suffer extinction, if microbial populations were destroyed or degraded. Although microbes are numerous and there are many species, they can be sensitive to the smallest of environmental change - changes in water acidity, levels of sunlight, toxins, etc. They can be quite fragile. However, they and their diversity are key to the survival of the forest. The microbial world of the rainforest, though lacking the appeal of the more exotic larger creatures, should be regarded as just as important as any other rainforest population. Therefore efforts should be directed towards understanding and preserving their habitat and the way they interact with the forest environment. The removal of forests from the land. Deforestation occurs when humans cut down trees to use as fuel or for building materials or to obtain land for agricultural, developmental, or other purposes. Deforestation results in the loss of an important sink for carbon dioxide during photosynthesis and an important element of the local ecosystem -- forests provide a home for plants and animals, stablize soils, and help regulate local climate conditions. Most deforestation results from burning to clear ground for agricultural production, leading to the release of more carbon dioxide and other greenhouse gases. www.puc.ohio.gov/consumer/gcc/defn.html ...read more.