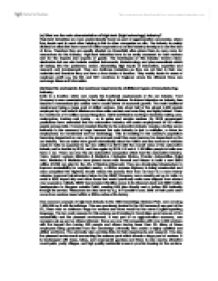 What are the main characteristics of high-tech (high technology) industry? (b) Describe and explain the locational requirements of different types of manufacturing industry.

(a) What are the main characteristics of high-tech (high technology) industry? High-tech industries are more predominantly found as part of agglomeration economies, where they locate next to each other helping to link to other companies on site. The industry is mainly situated on sites that have room for further expansion so as the industry develops so can the size of firms. Therefore they are usually situated on Greenfield sites where there is more room for researchers for the industry. High-tech industries have to be easily accessed for both workers and for the imports and exports of goods. The techniques of this industry involve micro-electronics but can also include medical instruments, biotechnology and pharmaceuticals which all belong into the quaternary sector, demanding high inputs of information, expertise and research and development. They are footloose industries as they are not tied to their raw materials and therefore they can have a free choice of location. They mainly locate in areas of maximum profit e.g. the M4 and M11 corridors in England, where the different firms can exchange ideas and information. (b) Describe and explain the locational requirements of different types of manufacturing industry. ...read more.

There are now 150 companies with over 3,000 workers with the largest firm having 320 people and others having fewer than 20. Many of these employees being graduates from the Cambridge University who create a highly qualified and skilled workforce. The university also provides links to their departments and research. It is also the pleasant environment surrounding the science park which attracts a large pool of workers. It is landscaped with trees, lakes, and ornamental gardens and there is also nearby attractive countryside, pretty villages, and high quality residential areas to provide housing for the workers. There are even excellent leisure facilities nearby Cambridge for them. There is a large flat Greenfield on the edge of the city providing room on site for further expansion. Accessibility being another major requirement for the Cambridge Science Park so its firms are easily reached by its workers and goods can easily be imported or exported via different links. For example, the science park is close to both the M11 and M25 motorways aswell as Stansted Airport allowing easy access for international links. The service industry, for example call centres have been locating in the LEDC's of India and the Philippines. ...read more.

The Philippine workers were also offered government incentives such as free premises, tax holidays for three to four years and cheap and guaranteed phone lines. Before the 1600's the Iron and Steel industry was located in the South of Wales mainly because it had to be tied to its raw materials. However sources of both the ore and energy have changed meaning the locations also had to change. Iron was originally sited where there were surface outcrops of iron and abundant wood for charcoal e.g. Forest of Dean. The UK was a guaranteed market for the colonies of India, US, Australia and Kenya. The industry however has more recently moved to NIC's such as South Korea, India, China and more importantly Malaysia. This is because of various reasons such as the large pool of employees who work for lower labour costs. There are no trade unions so they are not restricted and can therefore do whatever they wish which was not an option previously in the UK. The environmental laws were also not as re-enforced to the extent of the UK, so in Malaysia the industry could contribute to as much pollution as necessary without being restricted by law. The industry in Malaysia was also located in the market place increasing the accessibility to trade and therefore reducing transport costs. ...read more.