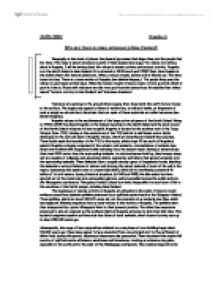 Why are there so many volcanoes in New Zealand?

30/01/2002 Prasshy.S Why are there so many volcanoes in New Zealand? 'Geography is the study of places; the physical processes that shape them and the people that live them. This essay is about volcanoes in parts of New Zealand (see map). The volcano I'm writing about is Ruapehu. I will be writing about the volcano's seismic activity and tectonic activity. Ruapehu is in the North Island in New Zealand. It is situated in 39.28 South and 175.57 East. New Zealand is the middle where the tectonic plates are. When a volcano erupts, molten rock is thrown out. This then turns into lava. There is a cross section of Ruapehu (see labeled diagram). The people living near the volcano in good ways and bad ways. When the volcano erupts it leaves a layer of very good soil, which is good to farm in. Places with volcanoes are also very good tourists attractions. We watched two videos named 'Tectonic Activity in New Zealand' and 'Volcanoes-disasters'. Volcanoes are openings in the ground where magma from deep inside the earth forces its way to the surface. The magma may appear as flows of molten lava, as volcanic bombs, as fragments of rock or simply as ash and dust. Mountains that are made of these materials are called volcanoes (see labeled diagram). Ruapehu volcano is the southernmost of the large active volcanoes of the North Island. Rising to 2797m (9175 ft), Mount Ruapehu is the highest mountain in the North Island and the most recent of the North Island volcanoes to have erupted. ...read more.

During this period the climate was colder than at present and most river beds were choked with sediment (aggraded) as further lahars spread laterally both to the west and to the east. Their deposits total in excess of 3-km3 volumes. Sometime between 4,500 and 3,500 years ago, instability of the upper cone led to 34 million m3 debris avalanche of largely hydrothermally altered rock and clay that swept to the east across the Rangipo Desert. It covered 20 km2 and destroyed a widespread beech forest on the southeastern ring plain at the time. In historical time the earliest report of eruptive activity at Ruapehu was in 1861 when a lahar was sighted in the Whangaehu River. Mr Henry Sergeant described the lahar in the vicinity of Wyley's Bridge: "In the mid-summer of 1860-61...I was standing on the bank (of the Whangaehu River) ...when I suddenly saw coming around a corner in the distance a huge wave of water and tumbling logs. They filled the whole trough of the stream...As it passed us it appeared to be covered with what we first thought to be pumice but the intense cold which soon made us shiver and turn blue caused us to discover that ...[this] was no less than frozen snow. Mixed with this was a mass of logs and debris. Very soon a bridge passed us stuck in the roots of a giant tree and a few minutes later about a dozen canoes came down". Campion et al., (1988). ...read more.

and the nature of the eruption. For example an eruption from Ruapehu through the Crater Lake will be different from one at say Ngauruhoe where there is no lake. Potential hazards include ash falls (pyroclastic falls), ballistic fall (lapilli and lava bombs), pyroclastic flows and surges, lava extrusions (flows and domes), lahars, volcanic gases, volcanic earthquakes and atmospheric effects. Many of these phenomena will only affect an area very close to the volcano. However, volcanic ash fall can be deposited hundreds to thousands of kilometres from its source, making it the product most likely to affect the largest area and the greatest number of people. When a volcano erupts it will eject a wide variety of material into the air above it. The large fragments of material, 0.1 to 10 metres in diameter, rarely land more than 1-2 km from the vent. However the fine material (millimetre-sized ash) can be carried by currents in the eruption column to high above the volcano and pass into the downwind plume to rain out forming ash (pyroclastic) fall deposits. Volcanoes are cone-shaped mountains made from magma that has come from deep below the ground. Most volcanoes are found in long narrow belts across the earth's surface. The earth's surface is made up of several plates that move about very slowly. Volcanoes and earthquakes are most likely to occur where plates meet e.g. New Zealand. Ruapehu is an active volcano in New Zealand. I have learnt a lot from this essay about tectonic plates and the volcano Ruapehu. I have also learnt about how it affects the people. I have thoroughly enjoyed this essay and hope to do similar essays in the future. ...read more.