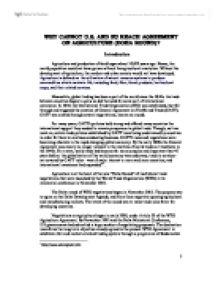 WHY CANNOT U.S. AND EU REACH AGREEMENT ON AGRICULTURE (DOHA ROUND)?

WHY CANNOT U.S. AND EU REACH AGREEMENT ON AGRICULTURE (DOHA ROUND)? Introduction Agriculture and production of food began about 10,000 years ago. Hence, the world population could not have grown without the agricultural revolution. Without the development of agriculture, the modern and urban society would not have developed. Agriculture is defined as the utilization of natural resource systems to produce commodities which maintain life, including food, fiber, forest products, horticultural crops, and their related services. Meanwhile, global trading has been a part of the world since the 1940s. As trade between countries began to grow so did the need for some sort of international commerce. In 1948, the International Trade Organization (ITO) was established, but fell through and triggered the creation of General Agreement on Tariffs and Trade (GATT). GATT was created through several negotiations, known as rounds. For many years, GATT's policies held strong and offered many countries the international support they needed to remain prosperous in global trade. Though, as time went on, certain trade policies established by GATT were being undermined by countries in order for them to continue conducting business. GATT's rules and regulations were becoming obsolete in the rapid changing global economy. By the early 1980s the General Agreement was clearly no longer relevant to the realities of world trade as it had been in the 1940s. For a start, world trade had become far more complex and important than 40 years before: the globalization of the world economy was underway, trade in services - not covered by GATT rules - was of major interest to more and more countries, and international investment had expanded"1. Agriculture is at the heart of the new "Doha Round" of multilateral trade negotiations that were launched by the World Trade Organization (WTO) at its ministerial conference in November 2001. The Doha round of WTO negotiations began in November 2001. The purpose was to agree on the Doha Development Agenda, and from there negotiate opening agricultural and manufacturing markets. ...read more.

for achieving those objectives during the next phase of negotiations now underway. U.S. Proposal -- WTO Agriculture Negotiations The United States proposes ambitious results in all three pillars of the agriculture negotiations: export competition, market access, and domestic support. The U.S. proposal is contingent on comprehensive reform in all pillars and meaningful commitments by all members, except the least developed countries. Special and differential treatment and other provisions of the July 2004 Framework will be developed in the negotiations to complement the elements below. Timing * Two stage process: initial stage of significant reductions in tariffs and trade-distorting domestic support, and elimination of export subsidies, followed by a second stage of reductions culminating in the full elimination of remaining tariffs and trade-distorting domestic support. * First Stage: tariff and subsidy reductions would be phased-in over 5 years. * Interlude: reductions pause for five year period for review of effects of first stage reforms. * Second Stage: Unless Members agree to change course, further tariff and trade-distorting domestic support reductions would begin after the interlude, culminating in the total elimination of remaining measures after a 5 year phase-in period, which include safeguard mechanisms to assist transitional adjustment. Domestic support In agriculture, the most controversial is the expansion of the Blue Box exemption on domestic support reduction which would give developed countries, particularly the US, the flexibility to transfer its amber box trade-distorting subsidies to the blue box. * Amber Box: 60% reduction in the total Aggregate Measurement of Support (AMS) for the United States. * AMS cuts will be based on harmonization principle agreed to in the July 2004 Framework, requiring the deeper cuts by the larger subsidizers. Cuts will be based on the following parameters12: Bound AMS level (billion U.S. dollars) Reduction $25 - 83% $12 - $25 60% $0 - $12 37% * This provides for a more equitable balance by reducing the disparity in allowed AMS between the United States and the EU from a ratio of 4:1 to a ratio of 2:1. ...read more.

This is especially true where support is counter-cyclical, or inversely related to market price trends. Conclusion To conclude, the question is raising again: who are the 'winners' and 'losers' and who benefits from these policies? According to the research by Oxfam the distribution of subsidies among farmers in both Europe and the US is more unequal than the distribution of income in Brazil, one of the world's most unequal countries in terms of income. The biggest 25 percent of EU subsidy recipients receive more than 60 percent of all subsidies. In the U.S. 60 percent of farmers get no support at all, while the biggest 7 percent account for 50 percent of government payments. The large slice of subsidies directed toward sugar and dairy producers makes up part of this distorted picture. To make matters worse, most of the benefits generated through agricultural support do not even reach producers: the supports are capitalized into higher land values and higher input prices. According to OECD (Organisation for Economic Co-operation and Development) estimates only 25 percent of price supports end up as net income gain for farmers18. The system results in unfair distribution and is highly inefficient. In the long run it provides false signals to the incoming generation of farmers and contributes to loss in equity for many. Furthermore, it contributes to disarray in world agriculture and to poverty worldwide. In short, whoever wins from the farm subsidy bonanza in rich countries, it is the developing countries that lose in aggregate. So, small farmers in developing countries suffer on several counts from rich-country farm policies. Northern production subsidies lower prices for farm produce. Unable to compete against subsidized competition, the world's poorest farmers are often pushed out of international and even domestic markets. The upshot is an agricultural trading system in which success depends less on comparative advantage than on comparative access to subsidies. Small farmers are efficient, innovative, and potentially competitive, and creatively combine farming with off-farm work. But the world's poorest farmers cannot compete against the world's richest treasuries, nor should they have to. ...read more.