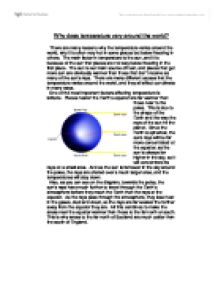 Why does temperature vary around the world?

Why does temperature vary around the world? There are many reasons why the temperature varies around the world, why it is often very hot in some places but below freezing in others. The main factor in temperature is the sun, and it is because of the sun that places are not way below freezing in the first place. The sun is our main source of heat, and places that get more sun are obviously warmer than those that don't receive as many of the sun's rays. There are many different causes that the temperature varies around the world, and they all affect our climate in many ways. One of the most important factors affecting temperature is latitude. Places nearer the Earth's equator are far warmer than those near to the poles. This is due to the shape of the Earth and the way the rays of the sun hit the planet. Since the Earth is spherical, the suns rays will be far more concentrated at the equator, as the sun is always far higher in the sky, so it will concentrate its rays on a small area. ...read more.

This means that areas by the sea (such as Edinburgh, or many other major cities in Britain) are cool in summer as the sea warms slowly, but mild in summer. The Atlantic Ocean is very cool in summer, and this is why the east is generally warmer than the west in summer (fig. 1), but during the winter the Ocean becomes a huge reservoir of heat, and the west of Britain can often be at least a few degrees warmer than the east (fig. 2). Another factor in temperature that is affected by the water around us is the ocean currents, which also greatly affects temperature, especially in coastal areas. These currents keep many coastal areas in Britain much warmer than they should be in winter, when many would be freezing. For example, the North Atlantic Drift Stream, which travels from Central America to Western Europe, keeps the coastal areas of the region mild in winter. But the Currents of Labrador, which drift down from the Arctic and North Canada down to South East Canada and North East USA, give this area temperatures of ...read more.

In Ecuador (named after the equator) there is always snow on the Andes, despite the fact that the equator runs right through the mountains. The windchill factor makes mountainous areas even colder. This is because humans all lose heat in cold air, but when there is a wind blowing, we lose heat even faster. Since there is a lot of wind in these mountainous regions, there is a lot of windchill, and this also allows snow to lie for long periods of time - that's why there is snow all year round in the Andes and in the Atlas Mountains of North Africa. Even in the Cairngorms in North Scotland, there is snow lying for over 50 days a year, and that is all due to the altitude and windchill factor. In conclusion, there are many reasons why temperature varies around the world, and they all affect our climates in different ways. The most important factors in global temperature are the sun and the seas, and they control the heat and the winters that we get here in Britain, as well as all around the world. ...read more.