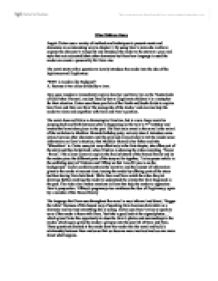 Wise Children Essay Angela Carter uses a variety of methods and techniques to present events and characters in an interesting way in chapter 1. By using Dora's voice she is able to express the character's viewpoint and introduce the reader to the story at a pace and style that not only establishes other characters but from how language is used the reader can create a personality for Dora also. The novel starts with a question to slowly introduce the reader into the idea of the legitimacy and illegitimacy. 'WHY is London like Budapest? A. Because it two cities divided by a river. Dora uses London to immediately explain how her and Dora live on the 'bastard side of Old Father Thames', not just literally but as illegitimate children it is a metaphor for their situation. Carter uses these parallels of the North and South divide to explain how Nora and Dora are from 'the wrong side of the tracks.' ...read more.

Tiffany's pregnancy also reinforces the idea of illegitimacy, again by a member of the Hazard family The language that Nora uses throughout the novel is very informal and direct, 'Bugger the robin!' Because of this honest way of speaking Dora becomes believable as a character and we trust everything she is saying. Carter uses Dora's voice to speak to us as if the reader is there with Dora, 'but take a good look at the signed photos...' which gives Carter the opportunity to describe Dora's photos and surroundings to the reader, which again gives the reader a glimpse into the past life of Dora and Nora. These questions directed at the reader draw the reader into the novel and build a relationship between Dora and us so that we become more involved and we care more about what happens. Carter, through Dora's opinions and descriptions, is able to establish the two families, Hazard and Chance, and the different personalities in these families. ...read more.

is shown when she describes the downfall of the Hazard family, 'Tristam Hazard...last gasp of the imperial Hazard dynasty...Lo, how the mighty have fallen', Dora is mocking the demise of the Hazard family, the once great Shakespearian act reduced to a host on a tacky game show. Dora pours scorn on the idea that the Hazard family are the height of respectability and legitimacy: 'Speaking of illegitimacy, there was more than a hint of romantic, nay, melodramatic illegitimacy in the Hazard family long before Nora and myself took our first bows', she breaks down the social barriers between the two families, lowering them to her status by revealing that even families of good reputation hide dark secrets. By the end of chapter 1 different questions gave been raised for the reader that now need answering, these questions create tensions that encourage the reader to find out more. The plot development within the first chapter portray not only the events, but as they are seen through Dora shape her character. ...read more.