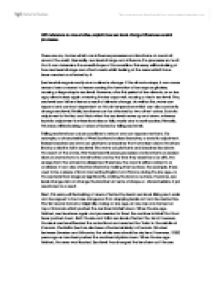 Sea level change is mostly due to climate change. If the climate drops, it can cause areas of sea or ocean to freeze causing the formation of ice caps or glaciers, causing a large drop in sea level. However, after this period of low climate, or an ice age, climate rises again, meaning the ice caps melt, causing a rise in sea level. Thus, sea level can fall and rise as a result of climate change. As well as this, water can expand and contract dependent on the air temperature which can also constantly change sea level. Finally, landforms can be affected by two other factors. Eustatic adjustment is the first, and this is when the sea level moves up and down, whereas isostatic adjustment is where land rises or falls, mostly due to earthquakes. Primarily, this essay will be looking at areas affected by falling sea levels.

Falling sea level can cause coastlines to retract and can expose new land. For example, a characteristic of West Scotland is raised beaches, a eustatic adjustment. Raised beaches are wave cut platforms or beaches that have risen above the shore line by a relative fall in sea level. The wave cut platforms and beaches rise above the reach of the waves. This therefore influences processes and landforms as erosion slows as waves have to travel further and by the time they reach land or cliffs, the energy from the waves has dissipated. Therefore, the coast is either added to or unaltered. It can also affect landforms by making them surface. For example, there used to be a piece of land connecting England and France during the ice age, as the sea level had dropped significantly, making the land re-surface. However, sea level change did not change the landform in terms of shape or characteristics; it just resurfaced as a result.

Next, this essay will be looking at areas affected by rises in sea level. Rising sea levels can be argued to be more dangerous than dropping levels as it can be destructive. The first area is Canada. Originally, during an ice age, an ice cap was formed on top of Canada which pushed the continental shelf down. When the ice age finished, sea level rose again and proceeded to flood the continental shelf that had been pushed down. Both the rise and fall in sea level affected the land; however, the rise in sea level flooded the actual land and created the ‘hole’ in the middle of Canada. The Baltic Sea has also been affected similarly to Canada. Situated between Sweden and Lithuania, the whole area should be dry land. However, 12000 years ago an ice sheet pushed the continental plate down. When the ice age finished, the area was flooded. Sea level has changed the landform as if the sea level did not rise, it would be dry land. However, this may change as the continental shelf is beginning to move upwards again. Poole Harbour has been significantly affected by the rise in sea level. Originally, the area was dry land yet was flooded when the sea level rose and is not the second largest enclosed harbour in Europe. To begin with, the harbour was protected by a bar pushed up by rising sea levels. This was then flooded and eroded by the rising sea levels. This was then flooded and eroded by the sea, causing the harbour area to flood. Finally, this essay will be looking at Bangladesh. The south of Bangladesh is flat, adjacent and in some cases below sea level and is perfect land for growing rise. However, if the sea continues to rise at its current level, after a rise of one metre, 25% of the country would be submerged, affecting half of the population. Afterwards, erosion and further flooding would be more likely to occur. This would increase erosion and therefore diminish the size of Bangladesh.

The Great Barrier Reef in Australia is affected by both an increase and decrease in sea level. The reefs fluctuate as sea level changes, between 1-15cm dependent on the levels of change. Originally, as the sea level rose, the corals grew higher on the hills of the coastal plain, and then continued to grow around the continental islands when sea level continued to rise. As it increased even more, most of the continental islands were submerged, but the corals then overgrew the hills. The reefs can also contract if sea levels drop.