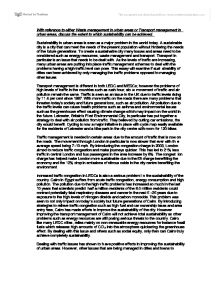 With reference to either Waste management in urban areas or Transport management in urban areas, discuss the extent to which sustainability can be achieved. Sustainability in urban areas is seen as a major problem in the world today. A sustainable city is a city that can meet the needs of the present population without hindering the needs of the future generations. To create a sustainable city many issues and areas need to be considered such as energy resources, waste management and transport. Transport in particular is an issue that needs to be dealt with. As the levels of traffic are increasing, many urban areas are putting into place traffic management schemes to deal with the problems having a high traffic level can pose. This essay will examine if sustainability of cities can been achieved by only managing the traffic problems opposed to managing other issues. ...read more.

Traffic management is needed in certain areas due to the amount of traffic that is now on the roads. The movement through London in particular is now slower that ever with the average speed being 7-10 mph. By introducing the congestion charge in 2003, London aimed to reduce traffic congestion and make journeys quicker. This has led to 21% less traffic in central London and bus passengers in the area increase by 6%. The congestion charge has helped make London more sustainable due to the �8 charge benefitting the economy and the 12% drop in emissions of nitrous oxide in the city centre benefiting the environment. Increased traffic congestion in LEDCs is also a serious problem in the sustainability of the country. Cairo in Egypt suffers from acute traffic congestion, energy consumption and high pollution. The pollution due to the high traffic problems has increased so much in the last 10 years that scientists predict half a million residents of the 6.5 million residents ...read more.

However, other issues that are being managed in cities and towns to improve sustainability should be noted. For instance if waste management in cities is controlled, the city will obviously benefit. For example in Leicester, there has been an aim to recycle 40% of household waste and due to a new partnership with Biffa the city is able to divert 70% of household waste from landfill. This has helped Leicester achieve environmental sustainability by helping to manage waste in an eco-friendly way. Overall, sustainability cannot be completely achieved by transport management. Sustainable development can be seen as a three-legged stool (as demonstrated in figure 1) with each leg showing a feature of sustainability; environmental, economic and social. Without achieving environmental, economic and social sustainability, can an area be seen as sustainable? For instance Leicester may have achieved environmental sustainability but might still have social inequity between ethnic minorities meaning the city will not be truly sustainable. In conclusion, traffic management schemes have helped urban areas achieve sustainability but other factors such as energy consumption should also be managed. ...read more.

Overall, this is a good response. It discusses the success of attempts to achieve sustainability through traffic management schemes. This is done by giving evidence for (such as the congestion charge in London) and against (such as the need for ...

Overall, this is a good response. It discusses the success of attempts to achieve sustainability through traffic management schemes. This is done by giving evidence for (such as the congestion charge in London) and against (such as the need for other measures for example waste management in Leicester) the idea that traffic management can lead to sustainability. It is good that the student gives evidence for both sides of the argument as this demonstrates that they have considered the question in an unbiased and impartial manner. To add, a key point to take from this essay is that they have defined sustainability in the introduction - this is vital to show that you understand the key concepts underlying the question.

The student gives lots of examples of specific cities that have used sustainability strategies. Giving specific examples is important as it shows depth of understanding - the student knows both the theory and how the theory occurs in real life situations. Additionally, this adds weights to their arguments because it shows the reader that the essay is evidence-based rather than opinion-based.

On the whole, the quality of writing is good. There is a clear structure: an introductory paragraph, the main body and the argument, and the conclusion. It is important to split your essay up in this way as it is conventional and also allows the reader to see that you can organise arguments in a logical and coherent manner. In criticism, some of the grammar and the way sentences are worded could be worked on (for example, "however the problems of high levels of traffic in the countries such as rush hour, slow movement of traffic and air pollution remain the same", doesn't quite make sense). Simple proof-reading could correct this.