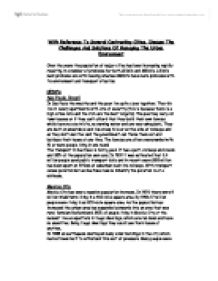 With Reference To Several Contrasting Cities, Discuss The Challenges And Solutions Of Managing The Urban Environment

With Reference To Several Contrasting Cities, Discuss The Challenges And Solutions Of Managing The Urban Environment Over the years the population of major cities has been increasing rapidly resulting in a number of problems for both LEDC's and MEDC's. LEDC's main problems are with housing whereas MEDC's have more problems with its environment and transport situation. LEDC's Sao Paulo, Brazil In Sao Paulo the wealthy and the poor live quite close together. The rich live in luxury apartments with lots of security (this is because there is a high crime rate and the rich are the best targets). The poor buy very old town houses or if they can't afford that they build their own favelas which have no electricity, no running water and are very unhygienic. They are built on unsuitable land like steep hills or on the side of railways and as they don't own the land the government can throw them out and bulldoze their house at any time. The favelas are often overcrowded with 10 or more people living in one room! The transport in Sao Paulo is fairly good. It has a port, railways and roads and 35% of the population own cars. In 1991 it was estimated that 3.4 million people used public transport daily and in recent years $95 million has been spent on 270km of suburban main line railways. ...read more.

If they add amenities to the favelas it means they can stay in the house that they built and the amenities e.g. water/ electricity will make life a bit better. Self help site and service schemes are where the government provides services and land. Residents build their own houses here (which become theirs) and they get electricity and water supplies. If you relocate people they need to find lots of new houses for squatters to move into which have better conditions. I think the best idea is to provide the basic amenities to their original homes so they don't have to move around a lot, it makes their lives more comfortable and it isn't so expensive for the government so they could provide this scheme for lots of people. MEDC's London London has a mixture of housing but nothing as bad as the LEDC's. The most deprived areas of London are around the city for example Hackney and Tower Hamlet. These areas have low quality housing like council flats, which are rundown and dirty. The areas with the least amount of deprivation are on the outskirts of London like Bromley or Harrow. These areas have private estates with large houses. The transport in London is awful. In the rush hour roads are gridlocked, motorways have huge traffic jams and public transport is crowded. ...read more.

It doesn't help that the area has a low wind speed and is in a basin, which means the pollutants can't escape. All the residents are at risk from fatal diseases resulting from pollution. Los Angeles' public transport is virtually non-existent and most people use their cars to get around the area. MEDC environmental and transport solutions Both cities need to invest a lot of money into sorting out their problems. Firstly, they need to look at the transport situation. They need to get the public to leave their cars at home when commuting into the city to avoid too much congestion. They then need to improve public transport so people want to use the service. Maybe introducing new bus services or more trains in and out of the city along with cheaper fares. Secondly, they need to look at the pollution in their city. Fewer cars would help a bit but its lots of little things, which make the big differences. They should introduce recycling schemes so we don't use up landfill sites with all the things that could be reused. In conclusion I would say both LEDC's and MEDC's have the same problems but some are on a larger scale than others for example LEDC's have a large housing problem compared to MEDC's. Most of the problems can be solved successful if the government is willing to put in the time, effort and money and the public is willing to co-operate. ...read more.