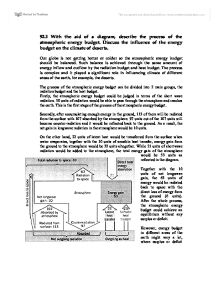 With the aid of a diagram, describe the process of the atmospheric energy budget. Discuss the influence of the energy budget on the climate of deserts.

Together with the 10 units of net longwave gain, the 63 units of energy would be radiated back to space with the direct loss of energy from the ground (6 units). After the whole process, the atmospheric energy budget could achieve an equilibrium without any surplus or deficit. However, energy budget in different areas of the earth might vary a lot, where surplus or deficit might result. For example, there is always a surplus in the Equator while deficits are often observed towards the pole. Therefore, the atmospheric energy budget of the Erath would also be affected by the horizontal heat transfer. Energy would be transferred from the Equator poleward through wind and ocean current. Therefore, deficits towards the pole would equal to the surplus in the Equator, contributing to the ultimate balance of energy budget. ...read more.

The direct loss of heat in deserts is much bigger and so the heat cannot be retained in the atmosphere. Fourthly, with the lack of moisture, the amount of latent heat transfer is also minimal. Without sufficient moisture, no water can bring the heat away from the ground as latent heat. Thus, the units of latent heat transfer would be very small in the desert area, making the climate of deserts hot and dry. It is obvious that the energy budget can influence the climates of different places and its effects are significant. The different processes during heat or radiation transfer contributed to such differences. Nevertheless, with the constant horizontal and vertical energy transfer, the temperature of the earth in general was managed to be kept more or less the same without getting any warmer or colder. ...read more.