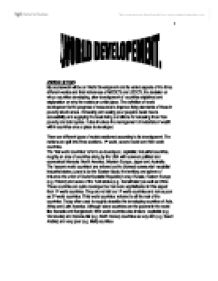 INTRODUCTION My coursework will be on World Development and its varied aspects of the three different worlds and their references of MEDC'S and LEDC'S, the decision on why a countries developing, slow development of countries explained and explanation on why the worlds an unfair place. The definition of world development is the progress of resources to improve living standards of those in poverty struck areas. Increasing and easing poor people's basic needs accessibility and supplying the basic living conditions for releasing them from poverty and debt cycles. It also involves the management of materials of wealth within countries once a place is developed. There are different types of worlds sectioned according to its development. The nations are split into three sections- 1st world, second world and third world countries. The 'first world countries' refer to as developed, capitalist, industrial countries, roughly an area of countries along by the USA with common political and economical interests: North America, Western Europe, Japan and Australia. The 'second world countries' are referred as the (former) communist -socialist industrial states, (used to be the Eastern block, the territory and sphere of influence the union of Soviet Socialist Republic) today: Russia, Eastern Europe (e.g. Poland) and some of the Turk states (e.g. Kazakhstan) as well as China. These countries are quite developed but not more sophisticated in this aspect than 1st world countries. They are not rich as 1st world countries and not as poor as 3rd world countries. Third world countries referred to all the rest of the countries. Today often used to roughly describe the developing countries of Asia, Africa and Latin America. Although some countries are the poorest in the world like Somalia and Bangladesh; third world countries also include capitalist (e.g. Venezuela) and Communist (e.g. North Korea) countries as very rich (e.g. Saudi Arabia) and very poor (e.g. Mali) countries. 1st, 2nd, and 3rd world countries are also referred as MEDC'S and LEDC'S. ...read more.

shows the difference of wage for people living in MEDC'S and LEDC'S. The majority is over 5000 US dollars per person per year IN MEDC'S, and the wealth majority in the world is towards MEDC'S with 80% of world's total income. But those living in ld have more population to only receive 20% of the world's total income leaving them very poor. The majority for a person is under 200 dollars per person per year. There's a major division between MEDC'S and LEDC'S wealth for example the average weekly wage in the UK is �380. The income of a village, in Northern Uganda, is �380 a week (the village has 82 adults within). The Market Economies- the rich of developed world with Britain has a GNP of 14, 570 per Capita but compared to a 'low' income developing country like Bangladesh is 180 dollars per capita; but Bangladesh is a bigger country with a bigger population resulting an even less income creating a poorer wage. The MEDC'S have a slow population growth due to family planning, 25% of the worlds population, so there's less people and more resources to go around. Although the population will double in 80 years time. But that's nothing compared to LEDC'S with an extremely fast population growth, there's hardly or any family planning; 75% of the worlds population. This means there's less resources to go around for more people, resulting in an increase of suffering. There's an explosion in birth rates that the population will double in only 30 years time. The Market Economies - the rich, developed world with UK has a birth rate as 14 and a death rate as 12; but a 'low income' developing country- Bangladesh has a birth rate of 41 and a death rate of 14; meaning there's more births and less decrease in population since there's less deaths, therefore populations are imbalanced. ...read more.

Ranges of different accommodation available and chance to gain a better overall quality of life. There's a trend of countries counter-urbanising. 2/3 of people in MEDC'S are moving away from cities: counter-urbanisation. 60% world's urban population now live in LEDC'S. This migration cause's people from LEDC'S to move on in the world achieve better prospects for their lives in the future. Most of the times its one way migration of rural to urban. Now more than 1/2 of the world's population live in cities and the population will increase. CONCLUSION In conclusion I think that the world is an unfair place because the MEDC'S and LEDC'S have such a big gap. The LEDC'S need as much help as possible but the MEDC'S aren't making matters better, since it has far more than it needs for such a small population and obviously wastes which could relieve poverty. The LEDC'S have too little for too many people and needs the worlds wealth shared, although LEDC'S only receive help when there's a disaster and the receives help from MEDC'S which results in extra debt. This causes an unbreakable cycle, causing the richer to get richer and the poorer to get poorer. The MEDC'S should help cut a lot more with their wealth and not make matters worse by making LEDC'S development low down. There are many aid organisations that help and support poverty struck areas, trying to break the cycle of debt. But for the time being citizens of LEDC'S are moving to the outskirts of cities for immediate positive prospects, whatever the way by even living in shanty towns just to be receiving good services like MEDC'S people. In my opinion I believe the poor countries have the rich resources to help sustain the people but it can only succeed to do so if the government weren't so corrupt and put more into debt developing its basic systems of education etc;. In the future maybe the MEDC' will increase as much when urbanisation expands outwards converting the suburbs into towns when the population is too big as it increases steadily. 1 ...read more.