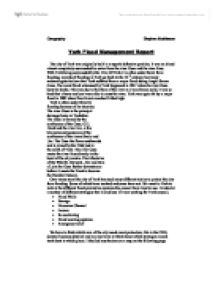 Geography Stephen Mathieson York Flood Management Report The city of York was originally built in a superb defensive position, it was an island almost completely surrounded be water from the river Ouse and the river Foss. With York being surrounded by the Vale Of York it is often under threat from flooding, records of flooding in York go back to the 14th century, but many archaeologists believe that York suffered from a major flood during Anglo-Saxon times. The worst flood witnessed by York happened in 1947 when the river Ouse burst its banks. This was due to the thaw of the river as it was frozen solid, it was so hard that a horse and cart were able to cross the river. ...read more.

Over many years the city of York has used many different tactics to protect the city from flooding. Some of which have worked and some have not. We went to York to look at the different flood prevention systems the council have tried to use. I looked at a number of different strategies that I could use if I was working for York council, * Flood Walls * Barrage * Diversion Channel * Levees * Re-sectioning * Flood warning systems * Emergency relief We have to think which area of the city needs most protection, this is the CBD, (central business district) ...read more.

The floodwalls will hold a huge volume of water so I have incorporated ings/flood fields so that this high volume of water can be safely disposed. C. I have chosen to invest money in early warning systems and forecasting equipment, I will put this equipment upstream so it will tell us when the river is likely to flood. D. Here I have provided emergency relief encase of a flood. I chose this are because it is right at the confluence of the Ouse and the Foss, this area is mostly likely to be one of the worst hit areas. I think that if York installed all of the flood prevention systems in the places I have stated it would be a safer place in the time of a flood. ...read more.