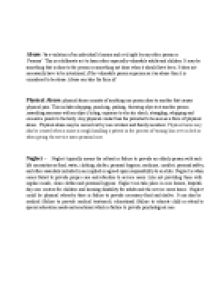 ﻿Abuse: ?is a violation of an individual?s human and civil right by any other person or Persons?. This is a deliberate act to harm other especially vulnerable adults and children. It may be something that is done to the person or something not done when it should have been. It does not necessarily have to be intentional; if the vulnerable person experiences it as abuse then it is considered to be abuse. Abuse can take the form of: Physical Abuse: physical abuse consists of anything one person does to another that causes physical pain. This includes slapping, punching, pushing, throwing objects at another person ,assaulting someone with an object, biting, exposure to electric shock, strangling, whipping and excessive punch to the body. Any physical contact has the potential to be seen as a form of physical abuse. Physical abuse may be carried out by care workers and family members. Physical harm may also be caused when a nurse is rough handling a patient in the process of turning him over in bed or when giving the service users personal care. Neglect ? Neglect typically means the refusal or failure to provide an elderly person with such life necessities as food, water, clothing, shelter, personal hygiene, medicine, comfort, personal safety, and other essentials included in an implied or agreed-upon responsibility to an elder. Neglect is when carers failed to provide proper care and attention to service users. ...read more.

A sexually abuse person may displays insecurity, loss of appetite, poor concentration, change in sleeping habits, unpredictable behaviour, uses obscene language, bed wetting which could lead to depression and withdrawer from certain activities. Psychological Abuse: The signs and symptoms of psychological abuse are feeling of depression, withdrawal from social interactions, isolation from friends and family. The victim will find it hard to trust others and he/she will always feel nervous. Another symptom of psychological abuse is depression. Because psychological abuse creates anger, this anger is often turned inward and develops into depression. Financial Abuse: This could be sudden changes in bank account or banking practice, including an unexplained withdrawal of large sums of money by a person accompanying the elder/dependent adult. One of the sign of financial abuse is when the service users is not allowed to spend money without agreement of a caregiver Another sign of financial abuse is when the victim failed to meet his/her financial obligation like paying bills. Institutional abuse: this could be lack of consideration of dietary requirements for example not providing service users their choice of food ( a Muslim service user may prefer Halal Meal), service users could also be called inappropriate names, they might lack adequate physical care and loss of dignity evidence of abuse in more than one person. Individuals may appear unkempt, dirty, unusually subdued, have lack of aids to support daily life, anxiety and fear in the presence of social care workers and drowsiness. ...read more.

Anorexia is starving to death and still feeling fat or ugly while Bulimia means eating huge amounts of food at the same time, then vomiting it afterwards. A service user who has been sexually abused will find it difficult to trust other people, particularly men. They always feel guilty about the sexual abuse because they believed that it must have been their fault. The victim of sexual abuse may block their emotions and feelings. Sometimes women who have been abused continue to abuse themselves in various ways (self harm). They may feel so bad, hopeless and become self destructive in the way they live their lives. Long term effects of Domestic violence: Many abused women will continue to struggle with the effects of the abuse they sustained for years or for the rest of their lives. Most of the physical injuries sustained by women from their abuse partners seem to cause medical difficulties as women grow older. Arthritis, hypertension and heart disease have been identified by abused women as directly caused by domestic violence early in their adult lives. Victims may experience physical injury such as, bruises, broken bones, head injuries, internal bleeding, chronic pelvic pain, abdominal and gastrointestinal complaints, frequent vaginal and urinary tract infections, sexually transmitted diseases, and HIV. In addition, abused women are at a greater risk to commit suicide. Many battered women spend so much money on divorce in order to avoid further abuse and this could lead them to poverty. They often lose their jobs because of absenteeism due to injury or illness as a result of the violence. http://www.escapefromamerica.com/wp-content/uploads/2010/10/domestic_violence.jpg http://www.newsshopper.co.uk/resources/images/1064827/?type=display ...read more.