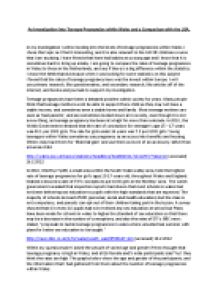 An Investigation into Teenage Pregnancies within Wales and a Comparison with the Netherlands.

﻿An Investigation into Teenage Pregnancies within Wales and a Comparison with the USA. In my investigation I will be looking into the levels of teenage pregnancies within Wales. I chose this topic as I find it interesting, and it is also relevant to the CACHE childcare course that I am studying. I have friends that have had babies at a young age and I know that it is sometimes hard to bring up a baby. I am going to compare the rates of teenage pregnancies in Wales to those in the Netherlands, and see if there is a big difference within the statistics. I chose the Netherlands because when I was looking for some statistics on this subject I found that the rates of teenage pregnancy here was the lowest within Europe. I will use primary research, like questionnaires, and secondary research, like articles off of the internet, and books and journals to support my investigation. Teenage pregnancies have been a debated problem within society for years. Many people think that teenage mothers wont be able to support there child as they may not have a stable income, and sometimes even a stable home and family. ...read more.

BBC news stated, ?proposals to tackle teenage pregnancies in wales where unveiled last summer with plans for better sex education to be taught.? http://news.bbc.co.uk/1/hi/wales/south_east/8534147.stm [accessed] 16.2.2012 Within my questionnaire I asked the people of varied age and gender if they thought that teenage pregnancy is high in Wales, and all 16 female and 5 male participants said ?Yes? they think the rates are high. The graphs below show the age and gender of the participants, and the information that I had gathered from them about the number of teenage pregnancies within Wales. Debates have been made over weather the age that schools within the UK implement sex education at an earlier age have shown a lot of controversy. Some people think that teaching young children about sex will give them the knowledge, and they will then have sex at an earlier age. Others disagree and think that teaching children sex education will allow them to see the negative affect of sex and will put them off. In countries such as Holland, sex education is taught to children as young as 5 years old but is gradually taught over the school period. ...read more.

http://www.independent.co.uk/extras/big-question/the-big-question-why-are-teenage-pregnancy-rates-so-high-and-what-can-be-done-about-it-1623828.html [accessed] 19.2.2012. Within my questionnaire I asked people whether they think that sex education should be taught within schools at a younger age. Information showed that 2 men and 11 women thought that it should be taught at a younger age, the most common answer for this being, ?They will be given the knowledge of contraception and will know more about the dangers of unprotected sex (STI?s)?. The rest of the participants, 3 men and 5 women said that sex education shouldn?t be taught to young children, giving reasons like, ?NO, as it would just teach them how to have sex at an earlier age? and ?Knowing more about sex will make them want to experiment more with it!?. Below is a graph to show the information gathered from the participants. This shows that most people think that sex education should be taught at a young age, as it would affect the rates of teenage pregnancy in Wales. Some said that it should be started young but not as young as 5, but maybe at the age of 7/8. ...read more.

This is a good essay that demonstrates how important good research is. The writer has obviously looked into this subject and it is reflected in what they have written. It could be enhanced by trying to make some suggestions about what they have found out. The writer could relate the ideas in Netherlands to the low rate and try analysing the findings. An interesting essay to read though.