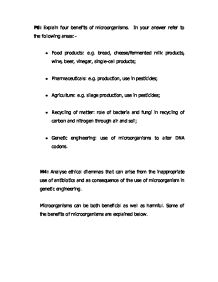 Analyse ethical dilemmas that can arise from the inappropriate use of antibiotics and as consequence of the use of microorganism in genetic engineering.

P6: Explain four benefits of microorganisms. In your answer refer to the following areas:- * Food products: e.g. bread, cheese/fermented milk products, wine, beer, vinegar, single-cell products; * Pharmaceuticals: e.g. production, use in pesticides; * Agriculture: e.g. silage production, use in pesticides; * Recycling of matter: role of bacteria and fungi in recycling of carbon and nitrogen through air and soil; * Genetic engineering: use of microorganisms to alter DNA codons. M4: Analyse ethical dilemmas that can arise from the inappropriate use of antibiotics and as consequence of the use of microorganism in genetic engineering. Microorganisms can be both beneficial as well as harmful. Some of the benefits of microorganisms are explained below. Food products: Microorganisms have been used in the production of food for many years. They are used in the food industry so that they can produce food which is both nutritious and to prevent food from spoiling. Microorganisms are found in food such as milk products (yoghurts and cheese) bread, vinegar, beers and wines. Dairy products such as yoghurts and cheese are a result of fermentation. fermentation is the breakdown of sugar into an acid. ...read more.

This has been very successful and the bacteria excrete human insulin. This is a much faster way of producing insulin as it bacteria can excrete insulin quickly. The insulin is a complete match for the human insulin so therefore a immune reaction will not happen. Microorganisms can also be used for the production of antibiotics; leeches are used to clean infectious wounds. Recycling of Matter: Composting is an easy way of recycling organic waste such as food waste, manure, leaves, grass trimmings, paper, wood, feathers and crop residue. It turns the waste products into a organic fertilizer. Composting is carried out under controlled aerobic conditions ( this means it needs oxygen). Bacteria and fungi break down the waste into simpler substances. In order for this to happen successfully the environmental conditions must be correct for example oxygen, temperature, moisture, material disturbance, organic matter and the size and activity of microbial populations. When animals and plants die organic molecule for example nitrogen still remains. Microorganisms are able to help with decomposition. ...read more.

Sperm sorting: this is where the sperm are taking from the man and are sorted into male and female. 2. Prenatal diagnosis: an ultrasound of the baby. There is a down side to this method as the only way to not give birth to the "wrong" sex is to terminate the pregnancy. 3. Pre-implantation diagnosis: if a person would like to have a child of a certain sex than they must undergo in vitro fertilization treatment. The unfertilized egg is taken from the women and fertilized in a Petri dish. They are brought to the zygote stage when cells are removed and tested using a technique known as pre-implantation. There are strong arguments for and against genetic engineering. One strong argument for is the fact that they can genetically modify a sheep in order to treat cystic fibrosis. This disease produces thick and sticky mucus in the lungs. We can also genetically modify plants in order for them to glow in the dark when they need water. Some of these examples are benefits and some we are made stop and think about it this really necessary. Some people believe it is unethical and should be banned because they are afraid what might happen in the future. ...read more.