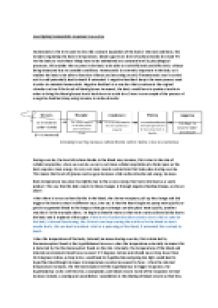 ﻿Investigating homeostatic responses to exercise Homeostatis is the term used to describe constant regulation of the body?s internal conditions, this includes regulating the body?s temperature, blood sugar level, level of Carbon dioxide level and PH. For the body to work these things have to be maintained at a constant level by physiological processes, this enables the enzymes in the body to be able to work efficiently and effectively without being denatured due to unstable conditions. Homeostatis is extremely important in the body as it enables the body to be able to function without you becoming unwell, if homeostatis wasn?t carried out it could potentially lead to death if untreated. A negative feedback loop is the main process used in order to maintain homeostatis. Negative feedback is a reaction that counteracts the original stimulus such as if the levels of blood glucose increased, the body would have to produce insulin in order to bring the blood glucose levels back down to a safe level. Here is an example of the process of a negative feedback loop using increase in carbon dioxide: During exercise, the level of carbon dioxide in the blood may increase, this is due to the rate of cellular respiration, when we exercise we carry out more cellular respiration at a faster pace as the body requires more energy to carry out more muscle contractions that take place during exercise. This means that levels of glucose and oxygen decrease while carbon dioxide and energy increase. ...read more.

This is probably unlikely to happen during our experiment as the exercise will not be intense. -As a result of more cellular respiration taking place, the body will release more energy than needed, some of this will be released as waste energy in the form of heat, this heat has to be released from the body through the skin using vasodilation, resulting in a rise in external and sometimes internal body temperature. Body temperature may increase slightly during exercise but should not exceed 37.5 degrees Celsius unless the individual is unwell with a fever (in which case they should not be taking part) if temperature does exceed this the individual should seek medical attention as they will be at risk of developing hyperthermia (more commonly known as heat stroke). Although we won?t be recording this I predict that around half an hour after exercise body temperature should go back to normal or decrease slightly due to heat being radiated from the skin through vasodilation and through the sweat glands but it should not decrease below 36.5 degrees Celsius. Method 1.Firstly, measure heart rate and breathing rate at rest for 15 seconds, then multiply by 4 and record the results. 2.Secondly, carry out a standard period of physical exercise. 3.Lastly, measure heart rate and breathing rate again in the same way as in step 1, ensure this is done immediately after exercise. Results Here is the raw data of 19 people?s breathing rates in breaths per minute and heart rate in beats per minute with ...read more.

Furthermore, during our experiment we did not set a pace or time in which the individuals had to complete the period of exercise, it was at each individual?s discretion, this made the results much more varied leading to inaccuracy, one may have run up and down the stairs while another may have taken small steps at a slow pace, these two individuals would return to the classroom with different levels of exercise and therefore different rates of homeostatic response. A way to improve this would be to set a pace that each individual should stick to such as taking 2 steps per second, you would still achieve some variation but the results would be much more accurate. Another point I should make is that some people may have walked more slowly back to the classroom meaning their heart rate and breathing rate would have had some time to begin to recover, meaning it shouldn?t be recorded as being straight after exercise. We also had to measure our heart rate before our breathing rate or vice versa as everybody returned at different times, this meant that some people?s heart rate would be more recovered than their breathing rate, whilst other people?s breathing rate would be more recovered than their heart rate, a way to prevent this from happening in another experiment would be to use appropriate equipment such as using a vital signs monitor which is usually found in hospitals, this piece of equipment usually measures heart rate, oxygen saturation, temperature, rate of respiration and blood pressure at the same moment in time making this much more accurate. ...read more.