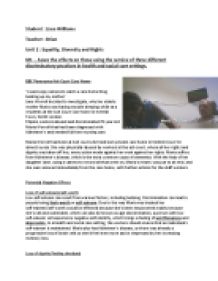 Asses the effects on those using the service of three different discriminatory practices in health and social care settings.

﻿Student : Lissa Williams Teacher : Brian Unit 2 : Equality, Diversity and Rights M1 ? Asses the effects on those using the service of three different discriminatory practices in health and social care settings. BBC Panorama Ash Court Care Home Abuse: Maria's carers 'treated her like she didn't exist', says her daughter ?I used a spy camera to catch a care home thug beating up my mother? Jane Worroll decided to investigate, why her elderly mother Maria was having trouble sleeping while at a residents at the Ash Court Care home in Kentish Town, North London. Filipino workers abused and discriminated 78 year old Maria Worroll that had been diagnosed with Alzheimer?s and needed full time nursing care. Maria Worroll had been at Ash court a 62 bedroom private care home in Kentish town for almost a year. She was physically abused by workers at the ash court, where all her rights and dignity was taken off her; every action made against her went against her rights. Maria suffers from Alzheimer?s disease, which is the most common cause of dementia. With the help of her daughter Jane, using a camera to record all that went on, Maria?s misery was put to an end, and she was removed immediately from the care home, with further actions for the staff workers. ...read more.

Harrowing ordeal: Filipino care worker Jonathan Aquino was caught slapping Maria Worroll around her thighs and her face Jonathan Aquino Jonathan Aquino, 30, was caught when Jane Worroll suspected her mother Maria, 80, was being mistreated and hid a camera in her bedroom; he was caught slapping Maria around her thighs and her face. Sentencing Aquino to 18 months in jail, Judge Henry Blacksell QC told the nurse he was guilty of a ?dreadful breach of trust?. The footage has now been turned into a film investigating the threatening world of Britain?s elderly care homes, which was shown last night on BBC?s Panorama. Speaking outside court, Jane Worroll said: ?Nobody as vulnerable as my mother should ever have to suffer or endure the unprovoked attack and mistreatment she has experienced at the hands of her supposed carers. Caught: Mr Aquino was caught when Maria Worrell's daugher Jane (pictured) suspected she was being neglected and installed a secret camera in her care home bedroom ?Had it not been for my actions, this abuse may never have been exposed, as I do not believe the existing safeguarding measures provide adequate protection. Baby P Peter Connelly also known as ?Baby P? was a 17 month old British boy born 1st March 2006 who died in London after suffering more than 50 injuries over an eight-month period, by his mum and step dad. ...read more.

would of made them feel worthless and useless as they couldn?t physically retaliate because they were made to feel that their care workers were superior to them. Other effects that may have occurred could have been negative behaviour, aggression or crime can be partly caused by this type of discrimination. In addition to the discrimination taken place against the service users (disabled people) they already may find it hard to control their moods, but with built up anger and frustration from the way they were treated could cause further problems to the way they behave towards other health and social care professionals. When people have mental health issues they are not always able to see things clearly. They may have low self-esteem and feel that they must be in the wrong; it is always their fault. This is what may have affected the patients at the winterbourne residential care home. http://i4.mirror.co.uk/incoming/article1228257.ece/ALTERNATES/s615/Eleven+members+of+staff+at+Winterbourne+Care+Home+who+have+been+convicted+of+abuse+following+an+investigation+by+Panorama Eleven care workers were sentenced after admitting 38 charges of neglect and abuse. Six were jailed for between two years and six months, while the others received suspended sentences. "We cannot undo the pain, the suffering and humiliating experience endured by people with learning disabilities, and we most certainly cannot leave it to the monolithic bureaucratic machine to ensure that such abuses never occur again." Reference; http://www.standard.co.uk/news/social-services-praise-helped-baby-p-mother-escape-neglect-charge-6882830.html http://www.bbc.co.uk/news/uk-11626806 http://www.dailymail.co.uk/news/article-2133673/BBC-One-Panorama-Undercover--Elderly-Care-Ash-Court-residents-daughter-uncovers-harrowing-abuse.html http://www.bbc.co.uk/news/uk-england-bristol-20084254 ...read more.