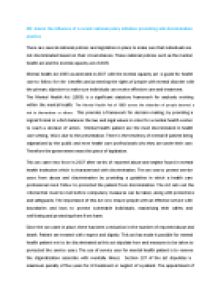 ﻿M2 Assess the influence of a recent national policy initiative promoting anti discrimination practice. There are several national policies and legislation in place to make sure that individuals are not discriminated based on their circumstances. These national policies such as the mental health act and the mental capacity act of 2005. Mental health Act 1983 as amended in 2007 with the mental capacity act is guide for health care to follow for the benefits and protecting the rights of people with mental disorder with the primary objective to make sure individuals can receive effective care and treatment. ...read more.

There is the tendency of mental ill patient being stigmatised by the public and even health care professionals who they are under their care. Therefore the government enact this piece of legislation. This act came into force in 2007 after series of reported abuse and neglect found in mental health institution which is characterised with discrimination. The act was to protect service users from abuse and discrimination by providing a guideline in which a health care professional most follow to protected the patient from discrimination. The Act sets out the criteria that must be met before compulsory measures can be taken, along with protections and safeguards. ...read more.

The use of service user for mental health patient is to remove the stigmatisation associate with mentally illness. Section 127 of the act stipulates a maximum penalty of five years for ill treatment or neglect of a patient. The appointment of independent mental health advocate helps to speak out for the detained patients However, despite this piece of legislation the major issue of discrimination and prejudice towards mentally ill still exist. The act does not cover the discrimination in the community, it only focuses on admission to hospital. Therefore the inclusion of mental health in the Equality act 2010. The Equality Act 2010 makes it illegal to discriminate directly or indirectly against people with mental health problems in public services and functions, access to premises, work, education, associations and transport. ...read more.

This piece of work looked at the impact of the Mental Health Act 07. I felt that the work could be improved by having more of a focus on the aspects of the Act which protect patients with MH problems. There was a brief mention of the use of MH advocates, but nothing more. What exactly is contained in the Act which protects patients from discriminatory practice? Discuss their right of appeal for example.
The writing style was in need of improvement due to the frequency of grammar errors which would not be acceptable for work at this level.
2/5