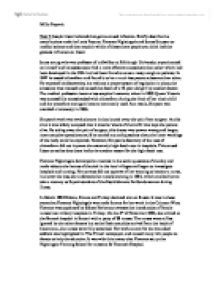 Briefly describe the contributions made by Louis Pasture, Florence Nightingale and James Simpson to medical science and then explain which of these three people you think had the greatest influence on Lister.

Task 2: Joseph Lister believed that germs caused infection. Briefly describe the contributions made by Louis Pasture, Florence Nightingale and James Simpson to medical science and then explain which of these three people you think had the greatest influence on Lister. James young who was professor of midwifery at Edinburgh University, experimented on himself and his assistants to find a more effective anaesthetic than ether which had been developed in the USA but had been found to cause a nasty cough to patients. In 1847 he tested chloroform and found it to be a much less potent substance than ether. He reported his discoveries, but without a proper system of regulation in place, the substance was misused and caused the death of a 15-year-old girl by another doctor. The medical profession became less sceptical however, when in 1853 Queen Victoria was successfully anaesthetised with chloroform during the birth of her ninth child and the procedure one again became commonly used. ...read more.

The nurses were at first ignored by the other doctors but as the fresh casualties arrived from the battle of Inkermann, the nurses were fully stretched. Her work to care for the wounded soldiers was highlighted in 'The Times' newspaper, and caused many rich people to donate to help the situation. It was with this money that Florence set up the Nightingale Training School for nurses at St Thomas's Hospital. Florence nightingales work in the Crimean wars helped to reduce the death rate from 42% to 2% by making the living conditions cleaner. She also made nursing into a respectable profession, this was a great achievement. However, Florence did not believe in Lister's theories and mocked them with the other doctors. Louis Pasteur was a French microbiologist and chemist. He is known for his work on the germ theory of disease and his devilment techniques of inoculation and for the first vaccine against rabies. ...read more.

In the previous year Lister had heard that 'carbolic acid' was being used to treat sewage in Carlisle, and that fields treated with it were freed of a parasite causing disease in cattle. Lister then began to clean wounds and dress them using a solution of carbolic acid. He was able to announce at a British Medical Association meeting in 1867, that his wards at the Glasgow Royal Infirmary had remained clear of sepsis for nine months. Although his methods initially met with indifference and hostility, doctors gradually began to support his antiseptic techniques. In 1870 Lister's antiseptic methods were used by Germany, during the Franco-Prussian war saving many Prussian soldiers' lives. In Germany, by 1878, Robert Koch was demonstrating the usefulness of steam for sterilizing surgical instruments and dressings. German surgeons were beginning to practice antiseptic surgery, which involved keeping wounds free from micro-organisms by the use of sterilized instruments and materials. However in Brittan it was not until much later that his theories and techniques were accepted. ?? ?? ?? ?? Millie Popovic ...read more.