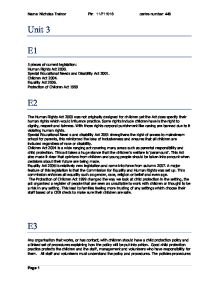 Unit 3 E1 5 pieces of current legislation: Human Rights Act 2000. Special Educational Needs and Disability Act 2001. Children Act 2004. Equality Act 2006. Protection of Children Act 1999 E2 The Human Rights Act 2000 was not originally designed for children yet the Act does specify their human rights which would influence practice. Some rights include children have is the right to dignity, respect and fairness. With those rights corporal punishment like caning are banned due to it violating human rights. Special Educational Need s and disability Act 2001 strengthens the right of access to mainstream school for parents, this reinforced the idea of inclusiveness and ensures that all children are included regardless of race or disability. Children Act 2004 is a wide ranging act covering many areas such as parental responsibility and child protection. This act takes a huge stance that the children's welfare is 'paramount'. This Act also made it clear that opinions from children and young people should be taken into account when decisions about their future are being made. Equality Act 2006 is relatively new legislation and came into force from autumn 2007. A major feature of this legislation is that the Commission for Equality and Human Rights was set up. This commission enforces all equality such as gender, race, religion or belief and even age. The Protection of Children Act 1999 changed the way we look at child protection in the setting, the act organised a register of people that are seen as unsuitable to work with children or thought to be a risk in any setting. This lead to families feeling more trusting of any settings which choose their staff based of a CRB check to make sure their children are safe. E3 Any organisation that works, or has contact, with children should have a child protection policy and a linked set of procedures explaining how the policy will be put into action. ...read more.

This can involve ensuring that basic care needs are continued successfully. Supported by, "Continuity if experiences are also important in terms of physical care for young children, such as nappy changing, feeding, and sleeping. Making sure that some elements of the new setting seem familiar can greatly assist children with settling in" Child care and education level 3 (Tassoni 2007 Page 148) In my placement when children are moved from nursery to reception, there is a focus on ensuring the two environments have a certain sense of continuity. Children have shared play areas; both areas have familiar facilities, such as sand play and wet play. The experience of continuity is continued by ensuring transitions are gradual, so children don't feel over whelmed by changes that happen all at once. For starting in a nursery for the first time children may make visits with parents for a morning or two a week and build it up until they are comfortable to come without a parent present until they start full time. Active involvement is part of supporting children through transitions. This can involve a number of strategies that keep children and young people as actively involved in the transition process as possible; this makes them feel valued as well. "In these situations it is good practice for "exchange visits to take place.... Such visits can be extraordinarily helpful as adults then know how best to prepare children" Child care and education Level 3 (Child care and education, level 3 Tassoni 2007 Page 148) D2 Practitioners must remember at all times the importance of using effective strategies that encourage self-reliance and independence in children and young people, In order to improve outcomes for children. This is supported by the Children's Act 1989 as in section B; the importance of choice and involvement is highlighted. "The main factors which influence quality of care are... children's involvement in planning and choosing activities and projects" (Children's Act 1989 Section B -6.25) ...read more.

For example allowing children to dress themselves and learn to dress them self such as putting on a coat or doing up buttons without always being aided. Another piece of legislation impacting on the working practiced of childcare, is "The children's Act 1989" This act speaks of how services should be made readily available to "Children in need" Meaning impacts on the settings such as more wide range of economic background children involved in activities and services. The health and safety at work act is another piece of legislation that impacts settings by making sure that all aspects of the setting is safe for the staff, parents and most importantly the children. This act has impacted settings in that we must have policies and procedures that make sure all equipment is up to date and safe, for example safely storing equipment and making sure fire extinguishers work. Settings now should produce practitioners that are up to date with health and safety regulations by training the staff to be aware of health and safety procedures. Settings must now keep high and this is done with regulatory bodies which where enforced due to the Children Act 1989. These professionals conduct inspections will look for and enforce the principles of the setting complies with all regulations and legislation. Regulatory bodies ensure that all aspects of legislation, especially ones effecting children, are in practice and used for example, allowing the children dignity, empowering children and giving children the opportunity for choice and discussion in their education. The discrimination of ethnic minorities and other members of the community is not tolerated in settings primarily due to the legislation and following regulations implemented by The Equality Act 2006. This impacts settings because we must show respect for all families and put families first by showing no prejudges towards anyone. As a result we now have setting that has a mixture of cultures and include all children. ?? ?? ?? ?? Name: Nicholas Trainor Pin: 11/711016 centre number: 448 Page 1 ...read more.