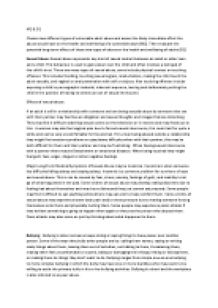 Insomnia is a common problem for survivors of rape and sexual abuse. This is can be caused by fear, stress, anxiety, feelings of guilt, and inability to let go of what happened in the past. Some victims of sexual abuse may develop eating disorders due to feeling bad about themselves and may be so distressed they just cannot eat properly. Some people may find it difficult to eat anything while others may eat a lot to help comfort them. Some victims of sexual abuse may experience lower back pain and/or chest pressure due to having someone forcing themselves onto them and physically hurting them. Some people may experience panic attacks if they believe something is going to happen them again or they see the person who abused them. Panic attacks may also come on just by thinking about what happened to them. Bullying: Bullying is when someone keeps doing or saying things to have power over another person. ...read more.

The first ugly outcome is that it becomes more likely that you will become increasingly susceptible to becoming depressed and/or angry and/or bitter. Being bullied teaches you that you are undesirable, that you are not safe in the world, and (when it is dished out by forces that are physically superior to yourself) that you are relatively powerless to defend yourself. Some adults who are being or have been bullied may start to self-harm and may have suicidal thoughts and feelings. The person may be so fed up with the bullying and feel so worthless that they do not see the point in living anymore. Self-harming may be away of the person releasing their anger and pain. In the long-term they may find it difficult interacting with other people in the fear of something hurtful being said to them and will find it difficult trusting other people. They may also have an increased tendency of wanting to be alone as they may feel that they are at less risk of being bullied. ...read more.