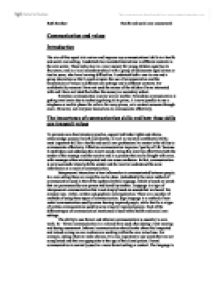 Communication and values Introduction The aim of this report is to review and improve my communicational skills in a health and social care setting. I undertook two recorded interactions in different contexts in the care sector. These took place in a local nursery for young children aged two to four years, and in a local secondary school with a group of adolescents aged eleven or twelve years, who have learning difficulties. I undertook both a one-to-one and a group interaction so that I could compare the use of communication and the transmission of values in different care settings and in different contexts. For confidentiality reasons I have not used the names of the children I have interacted with and I have not identified either the nursery or secondary school. Everyone communicates in some way or another. Nowadays communication is getting even easier due to technology being at its prime; it is now possible to use a telephone or mobile phone for calls to far away places, or to contact someone through email. However, not everyone knows how to communicate effectively. The importance of communication skills and how these skills can transmit values To promote non discriminatory practice, support individual rights and choice, acknowledge personal beliefs and identity, as well as maintain confidentiality the most important skill for a health and social care professional to master is the ability to communicate effectively. Effective communication improves 'quality of life' because it establishes and addresses the client's needs. Doing this involves effort from both the sender of the message and the receiver and is a process that can be fraught with error, with messages often misinterpreted and can cause confusion. ...read more.

This is why some group members were behaving in a competitive way. When we communicate, our ability to get our message across effectively to others can be weighed down by a number of barriers. As a care worker it is important to recognise barriers to your/our own communication and learn how to over come them. We carried out this interaction in an empty classroom which was more practical as we didn't have any background noise. However, there was a lot of interaction between the members of the group resulting in a lot of noise. I do not have a very loud voice and I found communicating in a group difficult as a result of this barrier. I tend to form opinions about people on the basis of how they look and behave. One of the boys looked scruffy compared to the rest of the group. This sent a message to me that he does not think he is worth bothering with or does not take pride in his work. The value of respect for the worth of every individual involves accepting and treating every person as worthy and important in their own right, 'simply because that person is a person' (miller 1996). I have learned not to read too much into what people are like on the basis of their appearance. Appearance does not really tell you that much about the person and I could fall into the trap of stereotyping someone on the basis of a misleading first impression. When one of the girls in the group told me they couldn't eat chocolate, I wanted to use touch to communicate reassurance that it was ok. ...read more.

I believe those open questions I used with Daisy were proven to be effective as she became more talkative afterwards. Not all the different types of communication were covered, as Signing; Braille and visual technology were not relevant. Barriers were mainly covered but cultural, language and belief differences were not relevant, although they could have been if there were different participants involved. During my group interaction a girl told me her problem that she could not eat chocolate, only for me to off-load my own experiences back. Maybe I could have dealt with this situation better if I was more aware of individual differences to be able to accommodate her during our interaction. However, I did not single her out for special treatment in a patronising way. The group interaction felt more a case of management of the situation. However, most of the management of the situation was through personal interaction, such as deciding who would begin the game, whether or not somebody had won and negotiating. I used secondary forms of evidence gathering, as a tape recorder would only record verbal communication and video recorders would be intrusive. The presence of an observer would also have been intrusive and likely to alter the nature of the interaction. A major problem with this evidence is that notes have to be taken after the interaction. This means some of the detail may be lost. During both interactions I used appraisal to improve the children's self-esteem. However, this may have sounded as if I was patronising them. Reflecting back on my practice I feel my attempts to apply communication skills while incorporating and transmitting values of care during interactions were satisfactory. ?? ?? ?? ?? Ruth Kember Health and social care coursework ...read more.