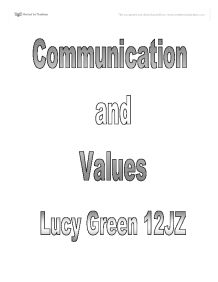 Introduction This is an assignment where I will do four interactions in two different care settings. The two different care settings I will be attending will be an infant's school and an old people's home. The school I will be attending is for both girls and boys between the ages of 4 to 11 years. I will be then carrying out two interactions, one of these will be with one child and the other will be with a group of children. The other two interactions will be taking place in a residential home where I am to interact one on one with an elderly person, and another interaction with a group of elderly people. The infant school I will be attending is Havelock Infants School. The catchments area is Desborough and surrounding villages. Havelock Infants is a community school that is of similar size to other primary schools. There are 215 pupils on roll from reception to Year 2. The school's intake is mostly of White British background, and there are small numbers of children from a few minority ethnic backgrounds. The residential home I will be visiting is called Beech Close, this is a care home where they cater for Dementia - over 65 years of age, where they have 12 places available, Mental Disorder, excluding learning disability or dementia - over 65 years of age where they have 7 places available, Old age, not falling within any other category where they have 42 places available, Physical disability over 65 years of age where they have 6 places available. The home is situated within the residential area of Desborough and is close to local facilities and amenities. The premises were purpose built some years ago and provide single rooms and a range of communal areas for the residents. These include small lounge areas within the 6 accommodation areas known in the home as 'flats' and 'the Street' area offering a variety of services including hairdressing, tea bar, library, shop and quiet room. ...read more.

I sat in an open position to let Katie feel like I am letting her in, which is more welcoming, relaxing and encouraging. I used open and closed questions, I used a lot of open questions to get Katie to put across what she was feeling and what she thought to encourage communication. I didn't come across any barriers while doing my activity with Katie, as we were on our own in a classroom this meant there weren't any noise barriers to overcome, the lighting was good which meant Katie could see well. Another barrier I could have come across and I was quite worried about was that Katie may not want to draw a picture with me, so I also took along a puzzle that we could have done encase she decided she didn't want to draw. While doing my activity with Katie I wanted to make sure that I encouraged Katie to be independent by letting her draw what she wanted, and let her pick what colours she wanted to use rather than just picking a colour for her this was empowering her. This meant she could explain why she chose the colour she has. So I believe I have encouraged a sense of empowerment. I could tell that Katie was quite shy when I first met with her as she was very quiet and answered very briefly, and was very smiley. I overcome this by talking to her about what she had done today, which she said she had read a book so we spoke about it to make her feel comfortable with me, which made it easier as she was more open with me and willing to talk with me which gave us both a topic that we could contribute to. When interacting with Katie I made sure I used informal and simple English, I have done this because I wanted to make sure Katie could understand me and therefore communicate back with me. ...read more.

I found it easier to communicate with Maureen rather than my other 2 interactions as she had already fully developed her language skills, and had socialisation skills. I believe that I encouraged a sense of empowerment and self worth in Maureen, that was in line with the care value base. When completing our game of norts and crosses i made sure that i didn't rush Maureen as I wanted her to do what she wanted rather than rushing her to make her decision. Planning - interaction 4 Who's taking part in the activity?: In this activity I will be interacting with 4 elderly people from the old people's home, on the day I will pick the 4 people i will be doing my interaction with. What is the activity?: I am going to play a few games of cards. Resources: Pack of cards Interaction 4 When arriving at the residential home, I asked to see the warden that I had previously seen as I had already gone through why I was there and what I needed to do. I had arranged to play cards with 5 of the elderly people when I was there previously. I thought this was a good choice as it would develop my communication skills. I firstly went into the lounge area where the warden introduced me to a group of 5 people who she thought was best for this interaction we then went into the games room where it was just the 6 of us so that none of the elderly people would get distracted. The 5 people were: Sam: A 65 year old gentleman. Brian: A 74 year old gentleman. Gina: A 76 year old lady. Joan: A 66 year old lady. And Helen A 79 year old lady. Me: hello everyone im Lucy, ive came here today to do an activity with you. Now were going to go around the circle and introduce ourselves starting with you (turning towards the gentleman next to me) ...read more.