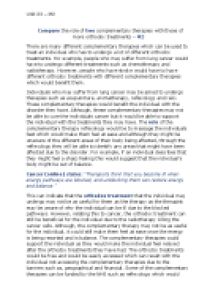 Another therapy such as the aromatherapy would also support the orthodox treatment as it could make the individual feel at ease as the therapy would help to heal the pain that the individual is experiencing from the different orthodox treatments. These therapies would not only support people who have cancer but would be able to treat people who may experience different signs and symptoms and can make people feel at ease after a stressful day. Aromatherapy would have the role to use different oils which will help a person heal. However, due to using oils people may prefer having reflexology as they might be allergic from the oil. This can cause contra-indications in the individual?s treatment. ...read more.