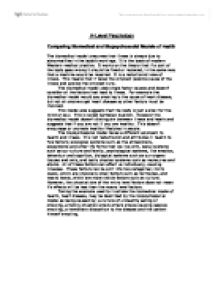 A-Level Psychology Comparing Biomedical and Biopsychosocial Models of Health The biomedical model presumes that illness is always due to abnormalities in the body's workings. It is the basis of modern Western medical practice. It works on the theory that if a part of the body goes wrong it should be fixed or replaced, in the same way that a machine would be repaired. It is a reductionist view of illness. ...read more.

This model also suggests that the body is just a shell for the mind or soul. This is called Cartesian dualism. However the biomedical model doesn't distinguish between illness and heath and suggests that if you are not ill you are healthy. This doesn't encourage or promote healthy lifestyles in people. The biopsychosocial model takes a different approach to health and illness. It is not reductionist and attributes ill health to five factors; ecological systems such as the atmosphere, ecosystems and other life forms that ...read more.

These factors can be split into two categories; micro levels, which are physically small factors such as hormones, and macro levels, which are more visible factors such as culture. However, the physical size of the micro level factors does not mean it's effects will be less than the macro level factors. Taking the example used to illustrate the biomedical model of health, heart disease, may be described by the biopsychosocial model as being caused by; a culture of unhealthy eating or smoking, a family situation where others smoke causing passive smoking, a hereditary disposition to the disease and the patient himself smoking. ...read more.

This is a short essay that introduces the general ideas of two models.

It is not very detailed but the definitions are accurate as they stand. The writer has used good examples to demonstrate understanding.