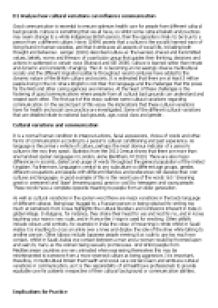 ﻿D1 Analyse how cultural variations can influence communication Good communication is essential to ensure optimum health care for people from different cultural backgrounds. Culture is something that we all have, so whilst some cultural beliefs and practices may seem strange to a white indigenous British person, then the opposite is likely to be true to a person from a different culture. Harris (1999) asserts that a culture is the socially learned ways of living found in human societies, and that it embraces all aspects of social life, including both thought and behaviour. Leinger (1991) described culture as ?the learned, shared and transmitted values, beliefs, norms and lifeways of a particular group that guides their thinking, decisions and actions in patterned or certain ways (Burnard and Gill 2008). Culture is learned rather than innate and dynamic and constantly changing. The UK is becoming an increasingly diverse multicultural society and the different migration patterns throughout recent centuries have added to the dynamic nature of the British culture and society. It is estimated that there are at least 3 million people living in the UK where English is not their first language and the challenges that this poses for the NHS and other caring agencies are immense. At the heart of these challenges is the fostering of good communications where people from all cultural backgrounds can understand and respect each other. ...read more.

These women were often stereotyped as being aggressive and this affected their interactions with healthcare professionals. Sometimes they felt that their conversations were being misinterpreted. One woman in the study described how a doctor was scared of her because she used her hands often when speaking and the doctor thought she was going to hit him (Likupe, G 2014). Cultural variations will also affect the way that health and social care workers and service users greet each other. The friendly, firm handshake common to the indigenous British population may appear rude to somebody from Arabic Middle-Eastern cultures. And in China, not only are weak handshakes preferred, but the custom is to hold on for an extended time after the initial shake. With no knowledge of this the indigenous healthcare worker may believe that the patient is very nervous. On the other hand receiving an extra firm hand shake from somebody with a South African culture, will not mean that they are being aggressive as in South Africa, the stronger the handshake, the better. Some cultures prohibit physical contact between men and women, so an handshake greeting would not be an option as it may cause offence. In such circumstances a nod of the head may be the appropriate way to greet a service user, and understanding these nuances are vital for building up relationships of respect and trust with the client and their family. ...read more.

Another factor which has major implications to the way cultural variations may affect communication is the increasing reliance of overseas workers in British healthcare who bring with them a diverse range of cultures. For example, in 2005 Internationally Recruited Nurses (IRNs) accounted for more than 60% of the nursing workforce in some healthcare organisations (Nursing Standard). Whilst the majority of these healthcare workers provide an excellent service there has been criticism that due to language barriers some are unable to engage in ?small-talk? with service users. These informal chats between nurse and patient are arguably very important to the patient?s experience and road to recovery. Conclusion It is important for health and social care workers to become familiar with cultural practices and behaviours because unfamiliarity could lead to misinterpretation and misunderstanding, with service users not receiving the desired care, thereby affecting safety and outcomes. The refusal of a Jewish surgeon to operate on a patient with a Nazi tattoo highlights the difficulties of cultural variations in communication and health and social care contexts (Day, M 2010). This also illustrates the power of non-verbal communication and how signs, symbols and the use of body language can influence the way a person interprets another person?s actions and intentions. In Multi-cultural Britain it is important that health and social care providers and educators make sure that the healthcare workforce are aware of cultural variations in health and social care in order to deliver the best care possible and achieve the best outcomes. ...read more.