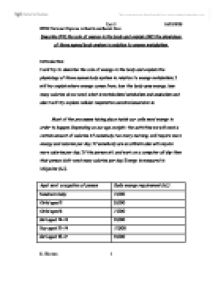 Describe (P4) the role of energy in the body and explain (M1) the physiology of three named body system in relation to energy metabolism.

Describe (P4) the role of energy in the body and explain (M1) the physiology of three named body system in relation to energy metabolism. Introduction I will try to describe the role of energy in the body and explain the physiology of three names body system in relation to energy metabolism. I will try explain where energy comes from, how the body uses energy, how many calories do we need, what is metabolism/catabolism and anabolism and also I will try explain cellular respiration aerobic/anaerobic is. Most of the processes taking place inside our cells need energy in order to happen. Depending on our age, weight, the activities we will need a certain amount of calories. If somebody run every morning, will require more energy and calories per day. If somebody are an athlete also will require more calories per day. If the person sit, and work on a computer all day then that person don't need many calories per day. Energy is measured in kilojoules (kJ). Age/ sex/ occupation of person Daily energy requirement (kJ) Newborn baby 2,000 Child aged 2 5,000 Child aged 6 7,500 Girl aged 12-14 9,000 Boy aged 12-14 11,000 Girl aged 15-17 9,000 Boy aged 15-17 12,000 Female office worker 9.500 Male office worker 10,500 Woman breast - feeding 11,300 Pregnant women 10,000 Heavy manual worker 15,000 Energy can exist in many forms, but chemical energy is the most common. ...read more.

The alimentary canal is split into a number of sections which are adapted for a particular part of the digestive process. Salivary glands produce the clear liquid that is released into the mouth (saliva, or spit). There are three pairs of major salivary glands and many minor glands. Saliva starts the breakdown of chewed food. It is made up of water, enzymes, mucin and protein. The oesophagus transport food from the mouth to the stomach. Food is moved by peristalsis - muscular contractions of the oesophagus. Salivary amylase continues to act during the short journey to the stomach. The stomach when the food reaches the stomach gastric juice is released from the stomach lining. Gastric juice contains two substances. 1. Pepsin - an enzyme which breaks proteins down into shorter chains called polypeptides. 2. Hydrochloric acid - needed to help pepsin work and also helps to kill any ingested bacteria. The stomach has two rings of muscles at the top and bottom, called sphincter muscles which prevent food from leaving the stomach while it is being churned around. After a few hours, the food is now a mushy liquid called chyme. It is then allowed to continue on its journey a bit at a time. The duodenum Cardiovascular system anatomy and physiology - heart, arteries, veins, blood Cardiac cycle Cardiac output Digestive system Anatomy and physiology Role of enzymes in digestion Respiratory system ?? ?? ?? ?? Unit 5 16/03/2009 BTEC National Diploma in Health and Social Care S . Harman ...read more.