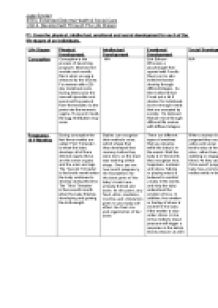 Describe physical, intellectual, emotional and social development for each of the life stages of an individuals.

﻿Jade Sinclair BTEC Extended Diploma Health & Social Care Unit 4- Development Through The Life Stages P1- Describe physical, intellectual, emotional and social development for each of the life stages of an individuals. Life Stages Physical Development Intellectual Development Emotional Development Social Development Conception Conception is the process of becoming pregnant. Most women ovulate each month, this is when an egg is released by the ovaries. For women with a 28-day menstrual cycle. During intercourse the man will ejaculate and sperm will be passed from the testicles via the penis into the woman's vagina. If a sperm meets the egg, fertilisation may occur N/A Erik Erikson Who was a psychologist that agreed with Freud's theory as he also believed that we develop through different stages, he then believed that Freud put a lot if desires for individuals but not enough needs that are accepted by society. He believed that we move through different life cruises with different stages. N/A Pregnancy (0-9 Months) During conception the first three months are called ?First Trimester?, is when the baby develops all of there internal organs these are the sense organs and the arms and legs. ...read more.

Girls go through a time of rapid growth right before their first menstrual period. And by age 15, girls are near their adult height. Boys usually continue to grow taller and gain weight through their teen years. At this stage adolescences has a period when there childhood thinking development turn into a teenage concrete thinking. They understand right and wrong. However, many adolescents begin to experiment sexually, and some may engage in risky sexual practices. Some adolescents may engage in illegal activities, such as theft, alcohol and drug use. Teenagers also learn at college were they can start planning there future job and t E.g. Jacqueline Wilson left school at the age of 16 As teenagers get older their emotional development continues. Their emotions have often been used to define the period of there actions. When adolescents become stress it is often from of a result of parent conflict. This can be because of teenagers striving to make independent choices and don?t agree with there parents. Erik Erikson Theory School-Age Child- (Competence) Adolescent- (Fidelity) At this stage of a teenage life they except personal space from there parents. They find there parents too interfering and do not understand them at all. During adolescence, teens spend much of their time with their friends. ...read more.

This makes them not breathing too fast or deep. N/A When someone close to you passes away you may go through all kinds of emotions. You may be sad, worried or scared. When you cope with a death you might be shocked, unprepared, or confused. You also might feel angry, cheated, relieved, guilty, exhausted, or just plain empty. You start feeling emotions that you is stronger and deeper than usual experience you?ve had. At this stage people think about death and dying in different ways. Some individuals are scared of death and try not to think about it at all, and others have strong religious beliefs which tell them not to worry about it. Older people tend to think and be less sacred of death, some older people may prepare for their death by achieving things in their lives that they have been wanting to do all their life. Individuals who are facing death want their family and friends around for comfort. {Meier, Ann and Gina Allen. 2007. ?The Development of Romantic Relationships from Adolescence to Adulthood." 30/11/11} {http://www.onetoughjob.org/development/0-1/growth-a-development-infants-0-1# 30/11/11} Book1 1, health and social care, 2010 {http://wilson-whatsitallabout.blogspot.com/2009/08/is-baby-p-case-reflection-of-broken.html 30/11/11} {Meier, Ann and Penny Edgell. 2007. "Religious Stability and Change from Adolescence to Early Adulthood 30/11/11} ...read more.