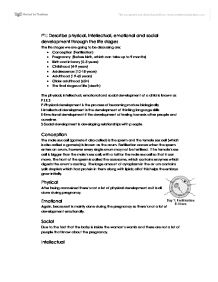 P1: Describe physical, intellectual, emotional and social development through the life stages The life stages we are going to be discussing are: * Conception (Fertilisation) * Pregnancy (Before birth, which can take up to 9 months) * Birth and infancy (0-3 years) * Childhood (4-9 years) * Adolescence (10-18 years) * Adulthood (19-65 years) * Older adulthood (65+) * The final stages of life (death) The physical, intellectual, emotional and social development of a child is known as P.I.E.S P-Physical development is the process of becoming mature biologically I-Intellectual development is the development of thinking language skills E-Emotional development if the development of feeling towards other people and ourselves S-Social development is developing relationships with people Conception The male sex cell (gamete it also called) is the sperm and the female sex cell (which is also called a gamete) is known as the ovum. Fertilisation occurs when the sperm enters an ovum, however every single ovum may not be fertilised. The female's sex cell is bigger than the male's sex cell, with a tail for the male sex cell so that it can move. The front of the sperm is called the acrosome, which contains enzymes which digests the ovum's coating. The large amount of cytoplasm in the ovum contains yolk droplets which had protein in them along with lipids; all of this helps the embryo grow initially. Physical After being conceived there's not a lot of physical development as it is all done during pregnancy. Emotional Again, because it is mainly done during the pregnancy so there's not a lot of development emotionally. Social Due to the fact that the baby is inside the woman's womb and there are not a lot of people that know about the pregnancy. Intellectual Intellectual development only starts developing during pregnancy. Pregnancy There are two main definitions of what pregnancy is and these are * Condition of having an embryo or foetus developing in the body * The process in which a female human carries a ...read more.

recognise people who they are familiar with and they prefer them * Understand No * They being to respond to their name Twelve months * They can tell different family members and act socially with them * Wave goodbye * Obey instructions * Copy people Fifteen months * Can point out members of their family * Show interest in playing with other children * Want to know who the strangers are Eighteen months * Follow their carer around and they will help their carer to simple tasks * Play with others * Try to find a social group for themselves * Still depend on their carers Two years * Will try to be independent * Ask for food * Will make demands and expect them to be completed as soon as they have demanded something * Possessive over toys and aren't sure of what sharing is * Tend to play with other children and they are beginning to play interactive games * Join in with a song or telling a story Three years * Can feel secure with strangers and in a strange environment * Enjoy playing games Intellectual Intellectually a baby will grow lots during this time, a baby will learn to talk they will do this by listening to the people around them. A baby believes there's nothing bad in the world as they won't see a lot of the world. Before learning to speak, a baby will use facial expressions until they can talk. it is during this time a baby will learn to follow people and things as they move with their eyes, they will learn to turn and they will explore things by putting it in their mouths. From seven to twelve months a baby will learn to make sounds like 'Mama' or 'Dada' they will look for things that aren't in sight and they can play pat-a-cake and will learn to say goodbye. ...read more.

Intellectual development Intellectual development begins from birth and leads into adulthood. We change the way we think, the way we communicate and the way we see the world around us. A baby can be seen repeating movements; this is because they are learning about cause and effect. Babies also learn that something still exists even if they can't see it. Learning to communicate and developing language skills are part of intellectual development too. Young babies are quite skilled communicators even though they can't talk they will use facial expressions to communicate. Emotional and social development Like other developments social and emotional development continue all the way through our lives. Emotional and social are often together as they interlink. Babies recognise those who interact with them and prefer to be in the company of them, than strangers. During adolescence is where there are many changes happening at once, there's the beginning of puberty and then there's trying to find out who they are and what their personality is going to be like. When coping with puberty and its effects it can lead to the teenager asking what normal is. There are a few issues that adolescents face: 1. Pressure from people and relationships 2. Relationships forming and intimacy 3. Understanding self 4. Establishing their identity 5. Their relationship with their parents During adolescence new friendships may form and these can last all the way through into adulthood, friendships become more important than ever before. New roles in work, partner, or at work and they may even become a parent. With every new role that begins there's an effect on the person's relationship and their identity. Middle adulthood and the parenthood roles and working roles change. Children may leave home and they could have a promotion. Older adulthood and the parenting role may have been reversed as the children may care for their parents. Potential causes and effects of delayed development * Genetic * Biological * Socio-economic * Life events(predictable/unpredictable) * Interrelationships between factors * Lifestyle * Environment ...read more.

This is an essay that starts really well. Like many others that discuss development through the life stages - it is stronger on infancy and childhood. It doesn't really discuss the later life stages too well and there are areas for improvement. It could be enhanced by looking at more theories to do with cognitive development and discussing this area - particularly in childhood. It also needs more discussion in teenager and adults with regard to self esteem and developing identity. A good start with potential to develop.